TV actor Sidharth Shukla left his fans drooling with his latest Instagram photo. If his handsome looks were not enough for all SidNaaz fans to be left day-dreaming, Bigg Boss 13 finalist Shehnaaz Gill posted a flirtatious comment and broke the internet.

Bigg Boss 13 winner and TV actor Sidharth Shukla dropped a new photo on Instagram and left his fans swooning. The actor looked handsome donning a football jersey and wrote, "Will social distancing on a football ground mean scoring goals be easier." With messed up hair and intense eyes, Sidharth set the temperatures soaring with his killer look. If the actor's photo was not enough for all SidNaaz fans to be left day-dreaming, Bigg Boss 13 finalist Shehnaaz Gill posted a flirtatious comment on his picture. The 'Punjab Ki Katrina Kaif' sang praises of his good looks and revealed that she couldn't stop herself from commenting on his latest Instagram post.

Will social distancing on a football ground mean scoring goals be easier ....🧐

Not just Shehnaaz, but Sidharth's close friend Vikas Gupta and the couple's designer Ken Fern also dropped compliments on the post." Vikas said, "Hahaha love the caption and the picture both", while Ken reacted to the actor's caption and wrote, "Even if you don't kick that hard." 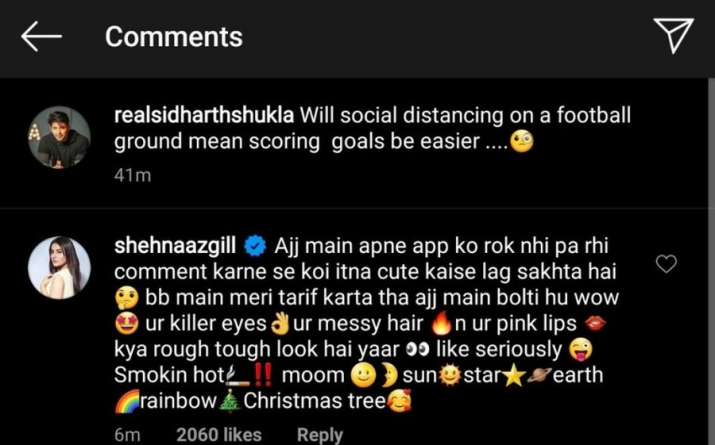 Sidharth Shukla and Shehnaaz Gill formed a very close bond during their stay in the controversial Bigg Boss 13 house. While they have not come out with their relationship status, their fans believe that the two are dating. It is also speculated that the singer-actress-model has been staying at Dil Se Dil Tak star's house during the lockdown.

After Sana’s comment, I’m sure this picture is not too far away. Bless us with this soon pls tnx @sidharth_shukla @ishehnaaz_gill #SidNaazShines pic.twitter.com/ctHmUzPAta

The thing I love about Sana is that she doesn't cares what people might say or think, she is very honest and can't hide her true feelings. It's just a comment but you can see how much genuine love she has for Sid like she wants to shower all her love on him#SidNaazShines

There is a madness in loving you, a lack of reason that makes it feel so flawless.😍
This is fact 💜#SidNaazShines#sidnazz pic.twitter.com/F8sIlOXZ70

Soon after the Bigg Boss, SidNaaz, as their fans like to call them, featured in a music video titled Bhula Dunga, It was sung by popular singer Darshan Raval and topped the charts instantly. It has garnered over 60 million views and the actors have promised their fans for a surprise if the song crosses 100 million views. Last month, Shehnaaz also treated her fans with a BTS video from the shoot of the song in which they were seen romancing.