Sana Khan shared a lovely photo on Instagram captured by her husband Mufti Anas Saiyad. While many praised her for her stunning look there were a few of them who trolled her for wearing a 'Hijab.' This caught Sana's attention who gave a perfect reply to the troller in the comments section.

Bigg Boss 6 contestant Sana Khan left everyone in shock when she chose to serve humanity and left the entertainment business. The 32-year-old later surprised fans once again when she announced her wedding with Surat-based businessman Mufti Anas Saiyad on November 20. Every now and then, she keeps on sharing pictures of herself clicked by her dear husband. Not only this but she also gives her well-wishers an insight into her life-- what she does in her daily life to where she is traveling. Yet again, she did the same by sharing a lovely photo captured by Anas in which she wore a hijab. While many praised her for her stunning look there were a few of them who trolled her for wearing a 'Hijab.'

The picture was bashed by a user who tried to mock her and asked what is the need of study so much if at the end you have to wear a Hijab. This caught Sana's attention who gave a perfect reply to the troller and wrote in the comments section, "Mere bhai, jab parde mai rahke I can do my business, have amazing in-laws and husband what more. I want. Most imp Allah is protecting me in every way. Alhamdulillah."

Check it out here: 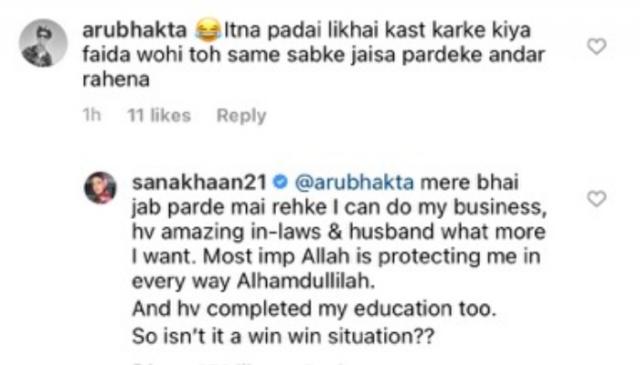 Sana is quite active on social media and keeps on sharing how she is enjoying her happy married life. She recently enjoyed a cup of gold plated coffee and wrote, "When ur husband surprise's u with breakfast at the top of the BURJ KHALIFA. That gold plated coffee. JazakAllah khair Iqbal bhai for this beautiful arrangement."

Speaking about her first meeting with Anas, Sana told TOI, "We first met in 2017 in Mecca. It was a brief meeting on the day I was returning to India. Anas was introduced to me as an Islamic scholar. I would like to clarify that he is an Alim and not a Mufti. I contacted him towards the end of 2018, as I had some questions about religion. Then, after more than a year, we reconnected in 2020. I was always inclined towards learning more about Islam."

Watch out for some beautiful pics of the two of them here:

On the work front, apart from Bigg Boss 6, Sana has even participated in Khatron Ke Khiladi.