Nach Baliye 9 is undoubtedly one of the most popular dance reality shows on the small screen. The show which began a few months back is all set for its grand finale but even before the same happens, congratulatory messages have been pouring in for Prince Narula and wife Yuvika Chaudhary who has been reportedly announced the season’s winner. Their victory has left actress Divyanka Tripathi excited who lifted last season’s trophy with husband Vivek Dahiya.

Prince and Yuvika who met each other on another reality show Bigg Boss fought with another power couple Anita Hassanandani and Rohit Reddy who eventually turned out to be the first runner up. On a recent Instagram post which was shared by Yuvika, Divyanka wrote her congratulatory wishes and said, “CONGRATULATIONS MY WINNERS Super happy,” after which the winner said, “@divyankatripathidahiya thank u lv u.”

Nia Sharma is unhappy with Shantanu Maheshwari's elimination from Nach 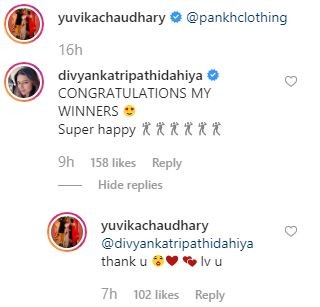 Talking about the season finale, it is also being said that Anita was in tears as she couldn’t take the defeat. She even shared a picture on Instagram with a post which hinted their defeat. Anita wrote, “We lost..., Ourselves..., in each others eyes. Love is all you need. And I want to thank all of you for all the love you always shower on us.”

Prince and Yuvika were in news a few weeks back for leaving the show because of unknown reasons.