TV actor Mohsin Khan who portrayed the role of Kartik Goenka on Yeh Rishta Kya Kehlata Hai, bid his last goodbye to the show via his Instagram post today (October 18).

Television actor Mohsin Khan who won hearts with his character Kartik Goenka on Yeh Rishta Kya Kehlata Hai is all set to bid adieu to the show. The actor took to Instagram and shared a collage of two pictures that had the first and last scene he had shot as Kartik for the sitcom. The first was on May 18, 2016, while the last will air today, October 18, 2021.

Moshin wrote in the caption, “First and Last scene as Kartik Goenka! Simply grateful for everything”. Mohsin added, ‘5.5 years MashAllah’. 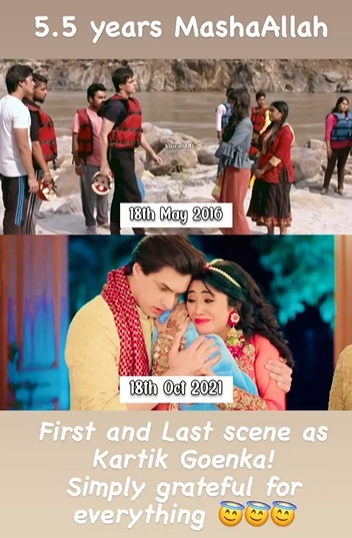 Mohsin’s character Kartik enjoys a massive fanbase and it was herat breaking for them when Mohsin announced his exit from the show. Earlier, Mohsin also shared several group pictures from the s the last his day of shoot. The producer of the show, Rajan Shahi penned a heartfelt note and shares a picture with Mohsin and Shivangi Joshi.

The daily soap has managed to complete over 3000 episodes in a time when its difficult to run a show for even six month. If reports are to be believed, the makers have finalized Pranali Rathod as the new face of Akshara.

There are also reports that claim that Harshad Chopda has been in talks for the male lead and will be replacing Mohsin Khan. The makers are yet to confirm the same.

Meanwhile, the show is all set to take a generation leap and that's why bidding a goodbye to all of its previous character.