The winner of Amitabh Bachchan’s Kaun Banega Crorepati Season 5, Sushil Kumar, who won Rs 5 crore, penned an emotional note about facing difficulties in life after winning the show. He revealed that it was the worst time of his life.

The winner of Amitabh Bachchan’s Kaun Banega Crorepati Season 5, Sushil Kumar, who won Rs 5 crore, penned an emotional note about facing difficulties in life after winning the show. He revealed that it was the worst time of his life. Kumar shared his note on his Facebook page and expressed his trials and tribulations which he went through after winning the jackpot. Right from getting addicted to alcohol to getting cheated in terms of money, he revealed it all.

Sushil who titled his note as ‘The worst time of my life was after I won KBC’ wrote, “From 2015 to 2016, it was the most difficult time of my life and I could not figure out what to do.” He spoke about how he was asked to appear for various functions in his home state Bihar almost 15 days in a month after he won the show. Doing this made him put his education on a halt and he started investing in a few businesses. He also did this as media was constantly interviewing him about the cash prize which he won. But, unfortunately all of Sushil’s ventures flopped one by one.

He then tried his hand in philanthropy and donated almost Rs 50,000 every month to different causes. But he later figured out that he was being cheated. Even his relationship with his wife suffered and the couple almost got divorced. Talking about his alcohol addiction after meeting some student groups in Delhi, Sushil said, “All this was followed by an addiction, of cigarettes and alcohol. Whenever we would meet, it would be over booze and cigarettes.”

Take a look at his note: 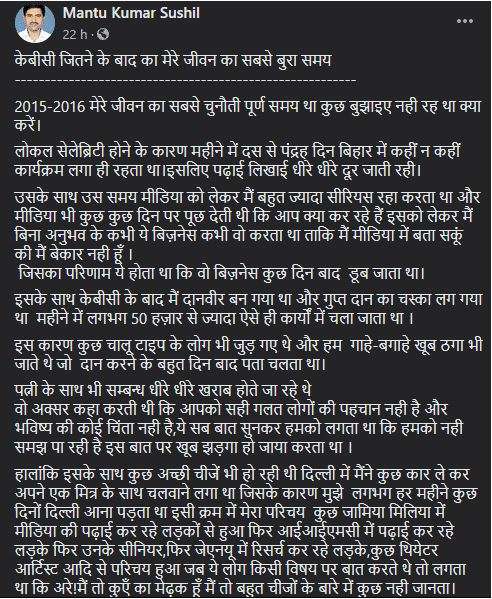 Sushil even became a big fan of movies and would spend hours watching films which inspired him to turn into a filmmaker. However, he was advised to try his hand on TV’s daily soaps first. He also wrote a script for a film which sold for Rs 20,000. In his note he said, “Staying in all day and reading about things made me take an unbiased look at myself and I realised that I didn’t come to Mumbai to become a filmmaker but to run away from my own self. The true happiness is in doing what your heart wants to do. You can never calm down you ego. It’s a thousand times better to be a good human than a famous one.”

After going through everything Sushil then returned home and became a teacher. He said he got rid of his drinking habit in 2016 and hasn’t smoked a cigarette since last year.