After Shamita Shetty's name for BB 15 was confirmed by the makers, Moose Jattana who participated with her in Bigg boss OTT, took a jibe at the actress by sharing a meme on her Instagram stories.

Actress Shamita Shetty who was recently seen in Bigg boss 15 will be participating in Bigg Boss 15. As the news was confirmed by the makers, Moose Jattana who participated with her in Bigg boss OTT, took a jibe at the actress by sharing a meme on her Instagram stories. Moose shares a tweet that read, “Sources confirmed that Shamita Shetty has been roped for Bigg Boss season 16 and 17, if still couldn’t be able to win then we can expect her in season 18 too (sic)!"

After her Instagram story, Moose was apparently trolled by Shamita's fans. Clarifying the same, she also posted a video. Calling out the trollers, Moose posted a video in Hindi saying, "Earlier, I was accused of being lazy and unhygienic, you all must have seen. Now, I am being called immature, jealous and uneducated. Alright, I am the only one in the whole world who is bad, you and your Shamita Shetty are great." 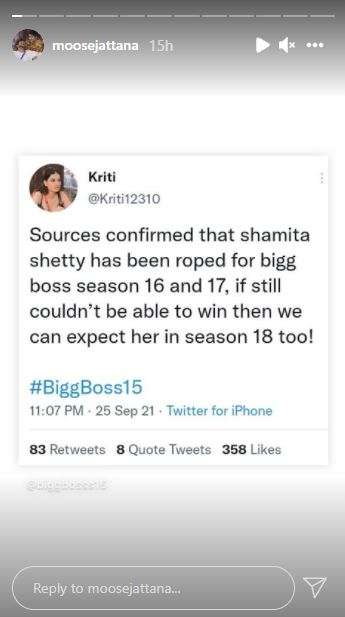 This is not the first time that Moose took a jibe at Shamita. After her eviction from BB OTT, Moose was asked if she thinks Karan Johar favours Shamita Shetty and doesn't give a fair chance to other contestants to put forward their viewpoints. Opening up about the same she claimed that KJo only asks Shamita and Neha Bhasin for clarifications.

"When you are hosting Sunday Ka Vaar you should ask who would like to speak and actually give time to everyone. Because everyone is a part of the show. Then you come and say we are not seen on the show. Aree how will the audience get to see us, you don’t even talk to us. We don’t even get a chance to talk on Sunday Ka Vaar. I don’t have the habit of shouting and interrupting someone, I find it rude. I would rather speak when I am meant to speak," Etimes quoted her as saying.

Meanwhile, the controversial reality show 'Bigg Boss 15' hosted by Salman Khan is going to start from October 2. Recently the launch of the show took place at Pench resort, Nagpur.

'Bigg Boss 15' will premiere on COLORS.