Time and again, Himanshi Khurana, Asim Riaz's fans ask them about when the two lovebirds will be getting married. Well, recently they sparked engagement rumours soon after the Punjabi singer shared a picture flaunting her Tiffany & Co diamond ring on Instagram story. Soon people started talking about whether the duo has got engaged. Look what Himanshi has to say about the same!

Bigg Boss 13 saw the beginning of a sweet love story which bloomed between Asim Riaz and Punjabi singer Himanshi Khurana. Ever since the couple came out of the show, they started appearing in various music albums. Time and again, their fans ask them about when the two lovebirds will be getting married. Well, recently they sparked engagement rumours soon after Himanshi shared a picture flaunting her big diamond rock on Instagram story. The ring was from luxurious international brand Tiffany & Co which is why she seemed so happy and wrote, "Uiiiiii" in the caption. Soon people started talking about whether the duo has got engaged. Look what Himanshi has to say about the same!

In an interview with Spotboye, Himanshi opened up about the same and said, "Chooda main apni life mein 20 baar pehan chuki hoon. Kyunki 20 baar meri shaadi ho chuki hai on screen. So all this is part of my life."

Further, she said, "But I am a ring collector. Logo ko aisa kyun lagta hai ki agar ladki ne ring pehni hai to use vo ladke ne kharidkar di hogi? I really like buying rings for me. Whenever I feel like buying a ring for myself, I buy it. It's my hobby and also an investment for me." 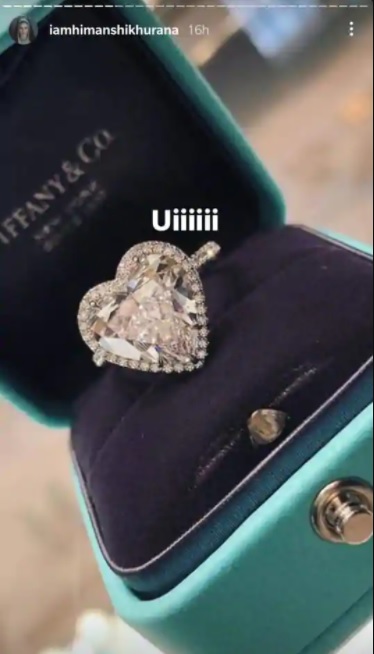 For those unversed about their love story, the two of them met on Salman Khan's reality show. She was already in engaged with Chow but soon after her exit was asked about her equation with Asim. She chose to end the relationship and went inside once again and said yes to Asim's proposal. Meanwhile, the host also confirmed it to her is she was really serious about him or it was just a rebound.

Every now and then, reports of them heading for a splitsville but the two of them have been saying it straight that they are very much in love with each other.

On the work front, Himanshi recently became the first female Punjabi artist to get featured at the Billboard of New York’s Times Square for her recently released song Surma Bole. The music of the song featuring Himnanshi is directed by Sandeep Sharma while the lyrics have been penned down by Bunty Bains and music by The Kidd.