Taking to Instagram, Benafsha Soonawalla shared a smoking photo of herself sans clothes posing in the bathroom all wet behind a glass wall. This caught the attention of not just her fans but also her boyfriend Priyank Sharma who could not stop himself from commenting on her post.

Bigg Boss 11 lovebirds Priyank Sharma and Benafsha Soonawalla have been treating their fans with adorable their adorable PDA on social media after the making their relationship official. Be it love-filled photos, videos, or adorable TikToks, they have been sharing them on Instagram and giving everyone some major couple goals. Yet again they did the same with their comments when the lady shared a super sizzling photo of herself on the photo-sharing application. Taking to Instagram, Benafsha shared a smoking hot photo of herself sans clothes posing in the bathroom all wet behind a glass wall. This caught the attention of not just her fans but also her boyfriend who could not stop himself from commenting on her post.

Talking about the photo, it was shared by the VJ on Instagram along with a caption that read, "To the moon and never back." Priyank was quick to respond and wrote, "'OKAY THEN" along with fire emojis. Benafsha in response to his comment wrote, "I love you. Most supportive boyfriend in the world."

On one hand, where people called her hot, there were many who called her shameless and trolled her for her vulgar photo. One of the users commented, "There is a thin line between vulgarity and glamorous, and now you have crossed it. I know it's your choice but if you wear a bikini obviously it's cool but this pic looks vulgar, I always see you as a confident woman, and you are, so don't destroy it."

Benafsha gave a quick response to him and hit out at him by saying, "There is a thin line between the right mentality and the wrong one, it's a really thin line so make sure you don't cross it." 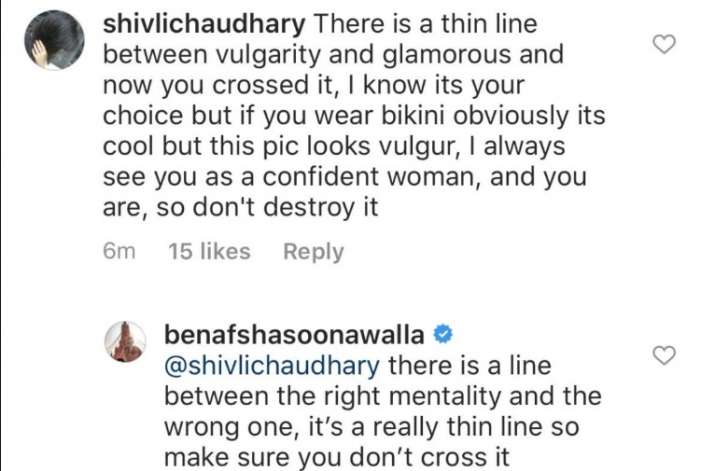 Coming back to Benafsha and Priyank, the two shared a mushy picture of themselves and while Benafsha called it "Can’t nobody keep me like you Call it unconventional My love is habitual," Priyank, on the other hand, wrote, "Confirmation."

Priyank while talking to BT said, "Once out in the real world, we spent a lot of time together and realized that we were in love. It has been exactly two-and-a-half years since Ben and I are together. She gives me a sense of completeness and we fit together like missing pieces of a puzzle."

What do you have to say about the two of them?