Popular TV actor Karan Patel might be a part of many reality shows like Khatron Ke Khiladi 10 and Bigg Boss 13 and can even host Vikas Gupta’s show Ace Of Space 2.

Popular TV actor Karan Patel is seen as playing the role of aggressive man Raman Bhalla in Yeh Hai Mohabbatein. The actor has recently lost his calm on the social media when a user sent vulgar messages to his wife Ankita Bhargava. He also blasted on the social media user on Instagram and said that he would get hold of him if he again did the same.

A report in IWM Buzz states, “There is an anonymous fan of his who has been sending vulgar messages to his better half, Ankita, on Instagram for no rhyme or reason. The concerned troll did not stop when asked to desist after which Ankita finally blocked him.”

He further told an entertainment portal that as a celebrity, he must tolerate all the flak and the trolls, but he added that it won’t be the same case if someone would use foul language his near and dear ones. He posted screenshots on social media and said that he is ready to file a police complaint if the person did not change his behaviour.

Check out the posts here: 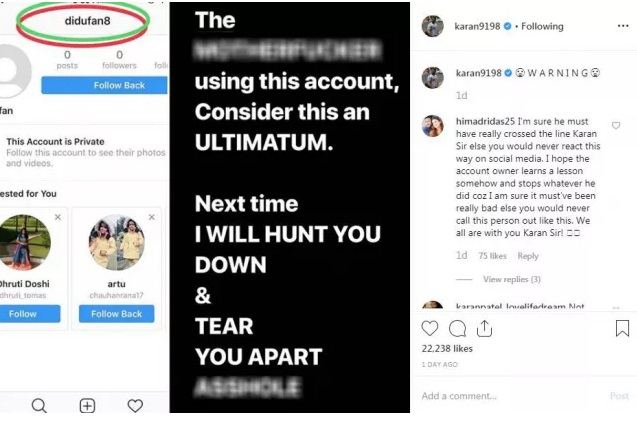 Talking about work front, he is currently seen opposite Divyanka Tripathi Dahiya. There are reports that the actor might be a part of many reality shows like Khatron Ke Khiladi 10 and Bigg Boss 13 and can even host Vikas Gupta’s show Ace Of Space 2.