Ekta Kapoor’s popular daily soap Kasautii Zindagii Kay got its reboot version in the form of Kasautii Zindagii Kay 2, the show that is gaining appreciation from the fans, all thanks to the storyline and the characters of Prerna, Anurag and Komolika played by Erica Fernandes, Parth Samthaan and Hina Khan. Dill Mill Gaye actor Karan Singh Grover in the last night’s episode of the show made his grand entry and soon there were opinions of people on the social media about his looks and entry. His wife Bipasha Basu too wasn’t behind and shared a hilarious meme.

The picture had Karan on the top and Bipasha and Anurag Basu (Parth Samthaan) on the bottom and a caption on it that said, “Suna hai Bajaj iss baar Basu ki Waaat Lageyga.” The image was shared by the Alone actress on her Instagram profile with a caption that read, “Hmmmm Bachke Rehna Re Bajaj Bachke rehna re… Bachke Rehna Re Bajaj Tujh pe Nazar hain... #humarabajaj.”

Soon the actor took to his Instagram story and shared the same post with a caption that made fans love him even more. He wrote alongside, “Iss Basu Ki Waat Lagane ke Baare mein socha toh ghar mein khana ni milega.” Karan and Bipasha’s cute conversation on social media were enjoyed by their fans. 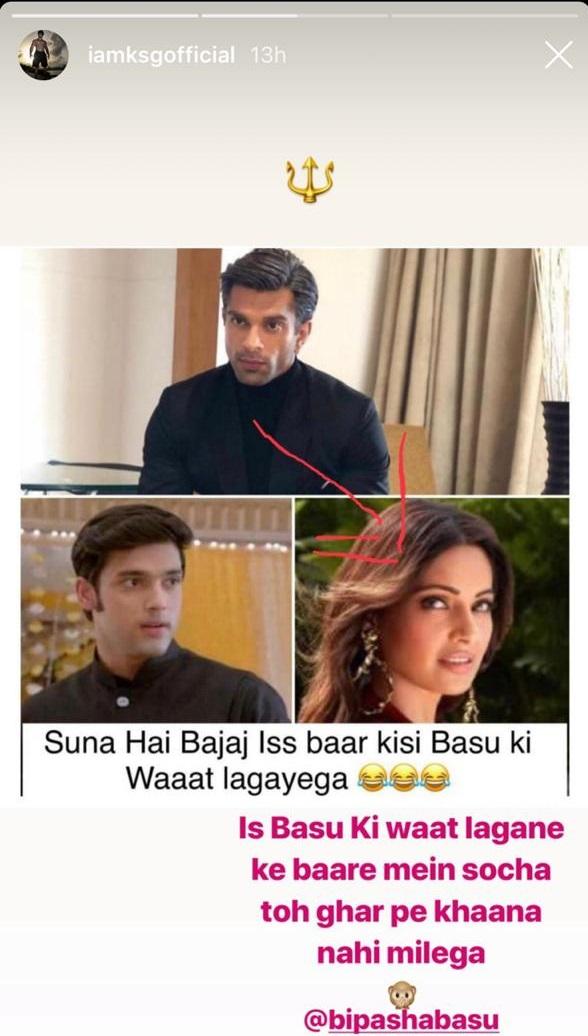 Meanwhile, have a look at the couple’s adorable pictures here:

Previously the role of Mr. Bajaj was played by Ronit Roy who gave his best wishes to Karan for stepping into his shoes. Talking about Mr. Bajaj’s entry in the show, the hour-long episode showed the ruthless attitude of the businessman who strives hard to achieve what he wants. Further, in the show, it will be shown how the dreamy life of Anurag and Prerna will be hit by a storm in the form of Mr. Bajaj.