Telugu superstar Allu Arjun's wife Sneha and kids- son Ayaan and daughter Arha tried making his birthday special with cakes and handmade cards. Have a look at what happened at the birthday celebration.

Telugu superstar Allu Arjun celebrated his 37th birthday today. But due to coronavirus lockdown, he couldn't celebrate his special day with his friends. However, his family including wife Sneha and kids - son Ayaan and daughter Arha tried making it the best one for him by making him cut a birthday cake. Since morning the pictures of his birthday celebration have been doing rounds on the internet and have been shared by Allu as well. In the picture, he can be seen cutting his birthday cakes which especially his family must've arranged during the time of difficulty. But, there's no worry when the family is near because they surely know how to make every day a birthday!

Have a look at the celebration pictures here: 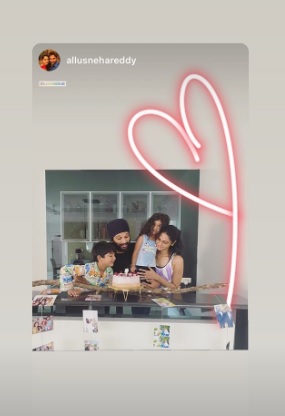 My World , My dream , My heartbeat, My everything @alluarjunonline annayya wishing you a very very very happiest birthday annayya. I never saw anyone like you, pure soul , golden heart and a real hero on screen as well off screen. Your smile make me smile, no matter how much sad I am but when I see you automatically smile comes on my face. Everyday I wish you always stay happy, fit and healthy. May you live long annayya..Lots of love and blessings on your birthday. Your craziest fan from North India 🤗🤗🤗 #stylishstar #alluarjun #kingoftollywood #myheartbeat #happybirthdayalluarjun . . @alluarjunonline @allusnehareddy @allusirish @allubobby 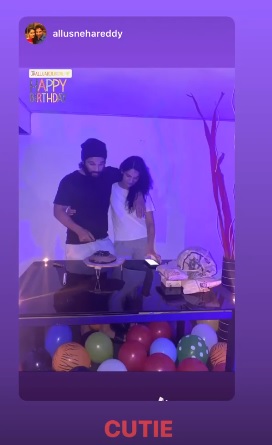 Allu Arjun's uncle Chiranjeevi took to his Twitter account to wish the actor. He posted a childhood picture of Allu Arjun breaking into a move, while Chiranjeevi looks on.

A post shared by Chiranjeevi Konidela (@chiranjeevikonidela) on Apr 7, 2020 at 8:17pm PDT

Meanwhile, the makers of his upcoming film took to social media to announce the title of his next film, and also share the posters. Titled "Pushpa", the posters of the Sukumar directorial show the stylish star in a rugged and rustic avatar. While the first look poster shows a close-up of the star, the second poster shows him seated crossed-legged on the ground with police officers standing in the background while sandalwood is being loaded onto a vehicle. The poster confirms the reports that the film is based on sandalwood smuggling, and will be set in a forest.

"First Look and the Title of my next movie 'P U S H P A'. Directed by dearest Sukumar garu. Music by dearest friend @ThisIsDSP. Really excited about this one. Hoping all of you like it," wrote Allu Arjun.

First Look and the Title of my next movie “ P U S H P A “ . Directed by dearest Sukumar garu . Music by dearest friend @thisisdsp . Really excited about this one. Hoping all of you like it . @rashmika_mandanna @mythriofficial #MuttamsettyMedia

Allu Arjun's last release, "Ala Vaikunthapurramloo", opened to critical acclaim and commercial praise a while back and has gone on to be a blockbuster.