Deepika Padukone is back as Shantipriya once gain. Yes, her debut film Om Shanti Om completed 13 years and to celebrate the same, the actess changed her name to Shantipriya on social media. She even changed her display picture on Twitter and Instagram to that of the film's poster with Shah Rukh Khan.

Om Shanti Om which was directed by Farah Khan and starred SRK and Deepika in the lead, did well at the box office and was a big hit. After the film's release in 2007 Deepika Padukone was shot to fame and was manage to steal many hearts. Ever since the actress has enjoyed a massive fan following. On Instagram she has 52.2 million followers where as on Twitter, 27.6 million people follow her. 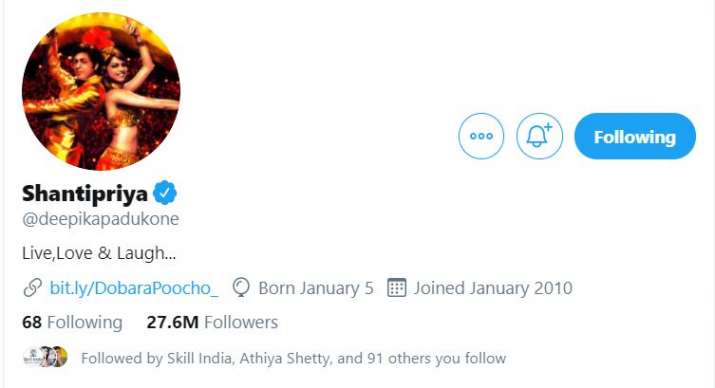 All the fans are celebrating the film's 13 years on social media. #13YearsOfOmShantiOm has started trending on Twitter.

In the film, Deepika portrayed a role of a fictional Bollywood herione Shantipriya who is murdered by her film producer. Meanwhile Shah Rukh portryaed a junior artist in the first half who has a crush on the actress. Meanwhile, in the second half he plays the role of a superstar. Apart from the characters and the storyline, film's music was very well received by the audience.

The film which also starred, Kirron Kher, Arjun Rampal and Shreyas Talpade in the pivotal roles won many awards.

Meanwhile, this is not the only film where Shah Rukh Khan and Deepika Padukone were starred opposite eachother, the two actors later collaborated on the blockbuster projects "Chennai Express" in 2013 and "Happy New Year" in 2014. And now as per reports, they could reunite for a fourth time, according to industry buzz, in a new film marking the Bollywood debut of Tamil bigwig filmmaker Atlee.

The two stars are set to collaborate on a project titled "Sanki", a report in Filmfare states, adding that the film is slated to be an all-out commercial entertainer.

With inputs from IANS.