Deepika Padukone and Arjun Kapoor share a close bond especially because of the actress’ husband Ranveer Singh. The duo was seen together on the big screen in the 2014 Bollywood film Finding Fanny.

Deepika Padukone and Ranveer Singh are currently in London with their families to unveil her wax statue at the Madame Tussauds. The Padmaavat actress went LIVE on her Instagram when she unveiled her statue and evidently, the Bhavnanis and Padukones were in awe of her. Soon after the launch, Deepika took to her Instagram to share pictures from the event and treated her fans with a good look of her wax figure. While her fans flooded the posts with praise and compliments for the statue and her, it was Bollywood actor Arjun Kapoor’s comments that stole away the limelight.

Deepika Padukone shared three pictures on her Instagram from the event. In one of the pictures in which the actress is seen posing with her wax statue, Arjun Kapoor wrote ‘haila judwa’ and in another picture, where Deepika is seen with her whole family and husband Ranveer Singh, Arjun commented, ‘Who’s that sexy beast on the left???? The original gangster!!!’ with a number of fire emojis. In this comment Arjun is indicating at his ‘baba’ Ranveer Singh who is posing with his wife’s wax statue. Check out the comments here- 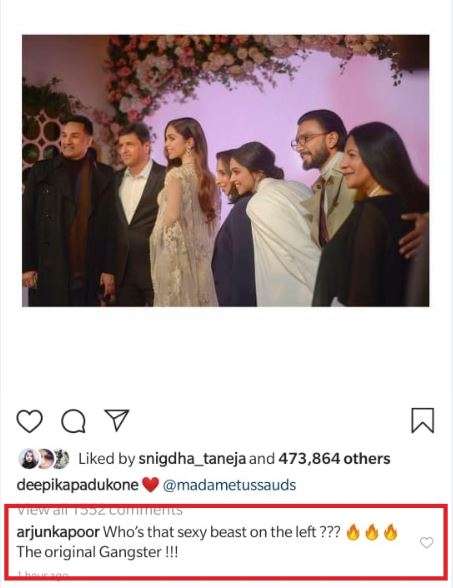 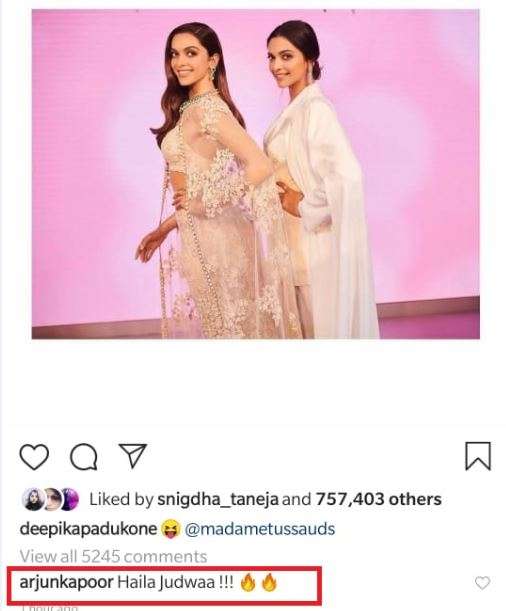 Arjun Kapoor shares a close bond with Deepika Padukone especially because of the actress’ husband Ranveer Singh. The duo was seen together on the big screen in the 2014 Bollywood film Finding Fanny. The actors even shared a kiss in the film when she was dating his best friend Ranveer. Talking about the same, Arjun has earlier revealed, “Ranveer would request me not to do it (kiss). He himself had a cameo in the film, so he had read that script. It was a very functional kiss. I have been friends with Deepika since she was dating Ranbir Kapoor. She would always laugh the moment I said hi to her. She has always seen me as the fat kid. No matter how much you change, some friends will always look upon you the same way.”

On the professional front, Deepika Padukone will be seen in Meghna Gulzar’s next film Chhapaak which is a story an acid-attack victim. The actress will start shooting for the film from March 25.