Alia Bhatt and Ranbir Kapoor spotted at real estate office. Are they planning to move in together? (Video)

Alia Bhatt and Ranbir Kapoor were seen outside a renowned real estate office in Mumbai on Wednesday.

Ranbir Kapoor and Alia Bhatt's relationship is growing stronger with time. The couple who started dating around a year ago, are now going casual about their PDA. Recently, at the two award ceremonies that took place in Mumbai, Alia and Ranbir didn't shy away from flaunting their chemistry, seated at the front row of the arena. Even during the acceptance speech while receiving the award, Alia Bhatt thanked her special one Ranbir Kapoor and expressed her love to him. Now amid the wedding rumours, Alia and Ranbir were spotted together at a renowned real estate office in Mumbai. They were seen with some documents in their hand, which suggests that they are planning to buy a property or are moving in together. They might be buying an apartment in Mumbai to make it their love nest. The video, which was shared by photo journalist Viral Bhayani has now gone viral.

In the video, neither did Alia Bhatt nor Ranbir Kapoor knows that they were being recorded on the camera by one of their fans at the site. They are seen walking out of the real estate office together, followed by some associates. They are discussing a serious matter, as it seems by the video. 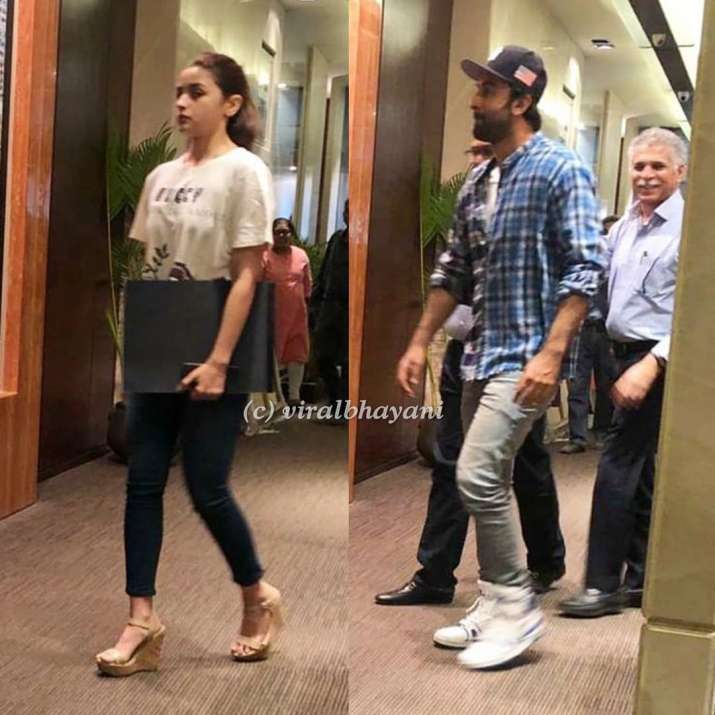 If this is true, the wedding bells are surely coming for the couple. A couple of months ago, rumours started buzzing that Alia Bhatt and Ranbir Kapoor are planning to move in together and if everything goes right, they will tie the knot by the end of this year. However, both Alia and her mother Soni Razdan have refuted such reports. Well, do you remember when Anushka Sharma and Virat Kohli were about to tie the knot in a secret ceremony? The couple denied all the marriage reports till the day of their wedding.

Seems like another Bollywood lovebirds are all set to enter the double's club. On a related note, Arjun Kapoor and Malaika Arora were also reported to be getting married this month. However, it seems like the wedding is not happening very soon, not this month at least.

On the work front, Alia Bhatt's film Kalank has just released in the theatres. It opened to mixed reviews from the film critics as well as the audinece. Let's see how the Abhishek Varman film fares at the box office.