After Britney Spears asked a judge to end court conservatorship that has controlled her life and money since 2008, several Hollywood celebs extended their support to her on social media by using #FreeBritney.

#FreeBritney became one of the top trends on Twitter on Wednesday after Britney Spears asked a judge to end court conservatorship that has controlled her life and money since 2008. The dramatic request at a Los Angeles hearing came with her first words in open court in the conservatorship in its 13-year existence. Spears called the conservatorship “abusive,” and condemned her father, Jamie Spears and the others who have controlled it.

Coming out in support of Brtiney a number of stars from showbiz, who took to social media to extend their support to her.

Justin Timberlake who's reported to have dated Britney in the past took to Twitter and wrote, “After what we saw today, we should all be supporting Britney at this time. Regardless of our past, good and bad, and no matter how long ago it was… what’s happening to her is just not right. No woman should ever be restricted from making decisions about her own body.”

"No one should EVER be held against their will… or ever have to ask permission to access everything they’ve worked so hard for," he wrote in a separate tweet adding, "Jess and I send our love, and our absolute support to Britney during this time. We hope the courts, and her family make this right and let her live however she wants to live."

Bollywood actress Rhea Chakraborty too shared a post in support of the singer-actress. Taking to her Instagram stories she posted, '#FreeBriteney'. 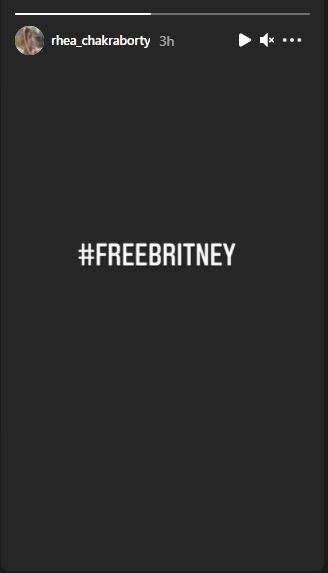 "No one should be treated like this. Stay strong Queen!! You deserve better #FreeBritney," Khloe Kardashian tweeted.

Actress Jameela Jamil too came out in support of Britney. "Wishing All the luck in the world to Tahani’s good friend, Britney Spears today. It is the most bizarre theft of freedom that has happened right in front of our eyes for over a decade now, and I hope she finds assistance with organizing her life that she is comfortable with now," she wrote on Twitter.

Singer Halsey said, "Bless Britney and I hope with my whole heart she is awarded freedom from this abusive system. She deserves it more than anything. I admire her courage speaking up for herself today."

As Spears spoke in court remotely by phone, she said, “I want to end this conservatorship without being evaluated,” in a long, emotional and sometimes profane speech, in which she condemned the legal arrangement and her father, who has controlled it for most of its existence.

“This conservatorship is doing me way more harm than good,” she said, adding, “I deserve to have a life. Spears said she wants to marry her boyfriend and have a baby, but the conservatorship won't allow her to.

Related: Britney Spears asks judge to free her from conservatorship: It is doing me way more harm than good

About 100 fans from the so called #FreeBritney movement gathered outside the courthouse before the hearing, holding signs that read “Free Britney now!” and “Get out of Britney's life!”

Her court-appointed attorney, Samuel Ingham III, made a request for the pop star to address the court at an April hearing. He said Spears has not officially asked him to file a petition to end the conservatorship.

Britney Spears has spoken in court in the conservatorship before, but the courtroom was always cleared and transcripts sealed.

The last time she was known to have addressed the judge was in May 2019.

Spears has since requested greater transparency from the court since then, and Penny has allowed far more to remain public.

The conservatorship was put in place as she underwent a mental health crisis in 2008.