After Hrithik Roshan's open letter came out in support of Sha Rukh Khan's son Aryan Khan, several celebraties have expressed their views on the same. SRK'S daughter Suhana Khan also took to social media and reacted to Hrithik's post. Although Suhana refrained from commenting, she left a heart on the post. On Thursday, Hrithik took to Instagram and penned an open letter addressed to Aryan. In the letter, Hrithik  asked Aryan to stay calm and own everything he experiences at the moment. He also wants Aryan to embrace challenges and be the better man that he is becoming.

Hrithik's friends and colleagues from the industry also showed their support on the post. Alia Bhatt took to the comments section and dropped heart emojis. Hrithik's ex-wife Sussanne Khan wrote, “true to this.." 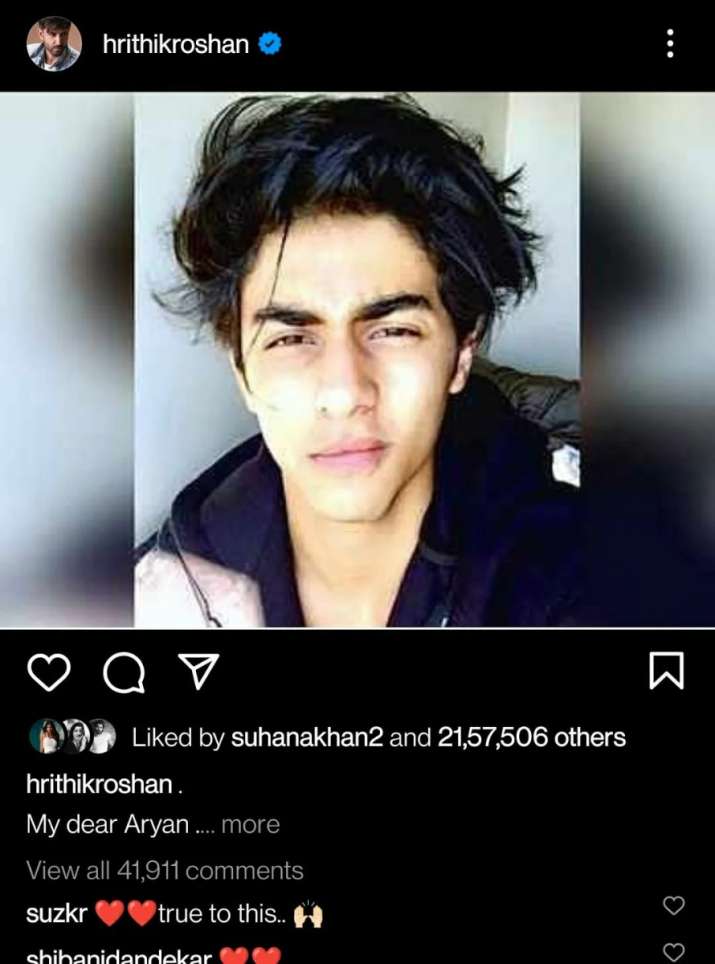 The excerpt from Hrithik's letter read: "My dear Aryan, Life is a strange ride. It’s great because it’s uncertain. It’s great cause it throws you curveballs, but God is kind. He gives only the toughest ones the toughest balls to play. You know you are chosen when amidst the chaos you can feel the pressure to hold your own. And I know you must feel it now. The anger, the confusion, the helplessness. Aaah, the very ingredients that are needed to burn the hero out from inside you. But be wary , those same ingredients could burn away the good stuff... the kindness, the compassion, the love."

For the unversed, an NCB team busted an alleged drugs party on the Cordelia Cruise ship which was on its way to Goa at mid-sea on October 2 night. During the same, as many as eight people including superstar Shah Rukh Khan's son Aryan Khan, Arbaaz Seth Merchantt, Munmun Dhamecha, Vikrant Chhoker, Ismeet Singh, Nupur Sarika, Gomit Chopra and Mohak Jaswal were detained for questioning.

Aryan Khan, Arbaaz Merchantt and 6 others have been sent to judicial custody for 14 days. Mumbai court said the case will now be heard by a special NDPS court. The court added that 'it will hear the bail plea of Aryan Khan on Friday (October 8) and asked NCB to file a reply by then.