Sugandha Mishra to marry Sanket Bhonsle in Jalandhar, a sneak peek into her intimate mehndi ceremony

Sugandha Mishra and Sanket Bhonsle's wedding will take place in Jalandhar, Punjab. Owing to the coronavirus pandemic, only family members will be attending the couple's wedding.

Comedian, television host and playback singer Sugandha Mishra is all set to marry The Kapil Sharma Show co-star Sanket Bhosle on April 26. The wedding will take place in Jalandhar, Punjab. Owing to the coronavirus pandemic, only family members will be attending the couple's wedding. The wedding festivities have begun and it's mehndi time for Sugandha. Treating her fans to her look for the wedding festivity, Sugandha posted a picture of herself on Instagram stories.

In the picture, she can be seen decked up in a green and golden embellished lehenga with heavy traditional jewellery. Over the photo, she posted a sticker that reads, 'Keep Calm and Henna on." Take a look: 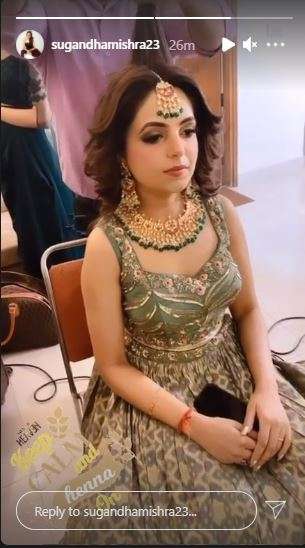 Sugandha and Sanket had announced the news of their wedding on their Instagram along with some mushy pictures from their pre-wedding photoshoot. In the photos, while the bride-to-be is seen dressed in a lavender gown, groom-to-be Sanket is seen wearing a black tux. "thanx for Showering your Blessings and Soo much of Love. Feeling really grateful for your wishes," she captioned the photos.

Earlier, speaking about the preparations of the wedding, the actress told TOI in an interview, "I have done most of my wedding shopping online and you won’t believe I had started the preparation from December for my wedding attire. I am very particular about my wedding outfit because for me it doesn’t matter if the marriage is happening in the presence of just 20 people, I always wanted to wear a 10 kg lehenga. I can marry online also but I have to wear a 10 kg lehenga."