Sidharth Malhotra's latest release Shershaah was screened at the opening ceremony of The Himalayan Film Festival 2021.

Bollywood actor Sidharth Malhotra was recently in Ladakh to attend the screening of his hit film 'Shershaah' at the first-ever Himalayan Film Festival. After attending the vent, the actor is set to bid adieu to Ladakh. On Saturday morning, he dropped some incredible pictures from the beautiful location of Leh. Sharing the pictures on his handle, he wrote, “Thank you Leh for being a warm host yet again! Until we meet next time...”

In the pictures, he looks charming as he can be seen sporting a polo neck black t-shirt with matching trousers and a blazer. Sidharth completed his look with stylish sunglasses.

On Friday, the actor had shared a picture with the honourable minister of Information and Broadcasting Shri Anurag Thakur. Expressing his excitement, the actor wrote, “Inaugurated the 1st Himalayan Film Festival with 'Shershaah' today. It was a complete honour to have shared the stage with our honorable Union Minister for I&B, Mr.Anurag Thakur. Thank you for having us."

Sidharth attended the event with his director Vishnuvardhan and other team members. Kiara, who played the role of Dimple Cheema in the film, couldn’t attend the event as she was busy shooting in Mumbai. She took to her Instagram story and penned a heartfelt note. She wrote, "Physically in Mumbai but my Heart is in Ladakh! Leh will always feel extra special as I gave my first ever shot for my very first film in this beautiful town, it's such a proud moment seeing our film Shershaah being honoured at the First Himalayan Festival." 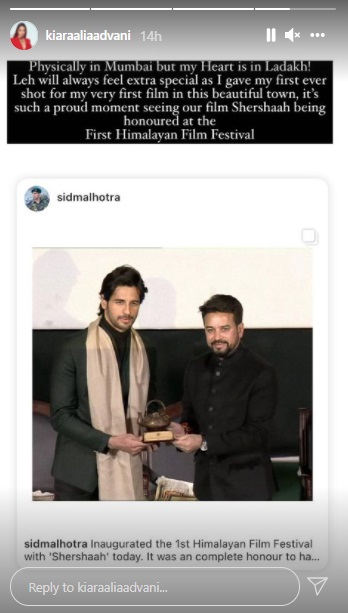 'Shershaah' is based on the life of Param Vir Chakra awardee Vikram Batra, who laid down his life in the service of the nation while recapturing Indian territories from Pakistani intruders during the Kargil War in 1999.

Meanwhile, Sidharth recently wrapped up the shooting of ‘Mission Majnu’ with Rashmika Mandanna. The film marks Rashmika's Bollywood debut. Shantanu Bagchi directorial spy thriller is inspired by real events in the 1970s. Sidharth will essay the role of a RAW agent in the film while Rashmika's role has been kept under wrap as of now.