'Kabir Singh' actor Shahid Kapoor for the first time in five years stepped into the kitchen and left wife Mira Rajput impressed with his culinary skills as he made the 'best pasta' for her. Seen the photo yet?

Bollywood actor Shahid Kapoor and wife Mira Rajput are one of the most adorable couples in the industry. Time and again, they have impressed us with their PDA moments either on social media or during public appearances. Sailing in the same boat, the duo caught our attention yet again when the actor decided to give some rest to his lady love and cook for her. For the unversed, Shahid and Mira have been making the best use of the lockdown by spending quality time. And this time they proved that not just to a man's heart, but a woman's heart can also be won through a scrumptious meal. For the first time in years, the 'Kabir Singh' actor stepped into the kitchen and left Mira impressed with his culinary skills as he made the 'best pasta' for her.

Taking to her Instagram stories, Mira shared a picture of the pasta made up by Shahid and said that it is the best one she has ever eaten. Along with the photo, Mira wrote, "The husband cooks for the first time in 5 years and this is by far the best pasta I have ever eaten!!! #nobias @shahidkapoor." 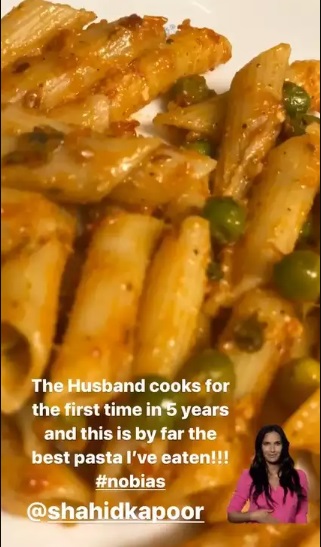 During an online interaction with his fans on Twitter, the actor revealed that he has been helping his wife in the household chores during the lockdown. When a fan asked if he was pitching in with the chores, Shahid said, Mera department bartan ka hai. Tumhara."

Have a look at some adorable photos the two of them shared amid the lockdown:

Missy caught me eating the math game. There are 43 pictures exactly like this. In case she was short of proof. #coolmomisnowregularmom

Missing the #outdoors This trip was #legend

Entering quarantine phase 4 be like . . @mira.kapoor can’t deal no more with me.

Recently, it came to light that Shahid during the difficult times transferred money to the bank accounts of as many as 40 background dancers from the troupe of choreographers Bosco Martis and Ahmed Khan. As per TOI, the information of the same was given by a former background dancer who is these days helping the dancers to connect with Shahid. He said, "Shahid Kapoor recently transferred money to the bank accounts of dancers he has worked. He has extended support to around 40 dancers and has stated that he will help them for the next 2-3 months."

On the work front, Shahid was last seen in Sandeep Vanga’s film and his next release will be Jersey which will also feature his father Pankaj Kapoor.