'Romantic' Mumbai rains are making Kangana Ranaut mushy: Who is meant for me please show up

Mumbai rains have left Bollywood actress Kangana Ranaut in a romantic mood. In a mushy post, the actress announced that she is yearning for the person meant for her to show up.

The Mumbai rains have left Bollywood actress Kangana Ranaut in a romantic mood. In a mushy post on Wednesday, Kangana announced that she is yearning for the person meant for her to show up. The actress took to her Instagram Story to share a beautiful photograph of herself lost in thoughts and wrote her musings over it.

"Nothing's more romantic than Mumbai rains, but single people can just daydream. Who is meant for me please show up na," Kangana captioned the photo along with a couple of red heart emojis!" 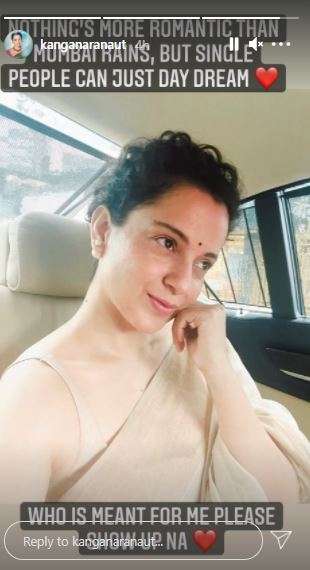 Some time back, Kangana had shared a similar message. She took to social media to welcome the month of June saying it has ushered happy feelings, sparkling thoughts and new ideas in her mind. Taking to Instagram Story, the actress had written: "Who all can feel a sudden gush of happy feelings, sparkling thoughts and new ideas with the beginning of June? There is a massive shift in how agitated and tired I felt through all of April and May. I am hopeful that this fizzy sparkling feeling will sustain..."

Also read: Kangana welcomes June with positivity:Massive shift in how agitated & tired I felt through April-May

Meanwhile, despite being the "highest paid actress" in Bollywood, Kangana is unable to pay her taxes on time as she had "no work". The 34-year-old actress said she is yet to pay half of the tax money she owes the government, adding, that the government is charging her interest on the pending amount but she still welcomes this move.

Also read: Kangana Ranaut has been unable to pay half of last year’s tax due to ‘no work’

On the work front, Ranaut, who recently recovered from novel coronavirus is awaiting the release of her multilingual biographical film "Thalaivi" which was postponed due to the surge in COVID-19 cases in India.

Directed by Vijay and written by KV Vijayendra Prasad, the movie is about the life of J Jayalalithaa, former Tamil Nadu CM and actor was gearing to release theatrically on April 23.

The National Award-winning actor will also headline movies "Tejas" and actioner "Dhaakad", while "Manikarnika Returns: The Legend Of Didda" and a film on former Prime Minister Indira Gandhi are in the pipeline.

-- with input from agencies