Bollywood actress Alia Bhatt has been quarantining with rumored beau Ranbir Kapoor and sister Shaheen Bhatt during the lockdown. The actress keeps treating fans with her lockdown routine through a series of photos and videos. Recently, Alia's sister Shaheen Bhatt took to Instagram to share a cute photo with her and wrote 'Hi sweetie.' The picture earned much attention from the fans who couldn't stop complimenting how adorable the Bhatt sisters looked. In the photo, both were seen on opposite sides of a glass wall with their nose touching the glass on each side.

Reacting to the photo, Alia commented and replied to her sister saying 'Hi sweetie'. Their mother Soni Razdan also dropped red hearts on the photo. However, it as Ranbir Kapoor's sister Riddhima Kapoor Sahni's comment that attracted attention. She wrote, "Too too cute." Check out- 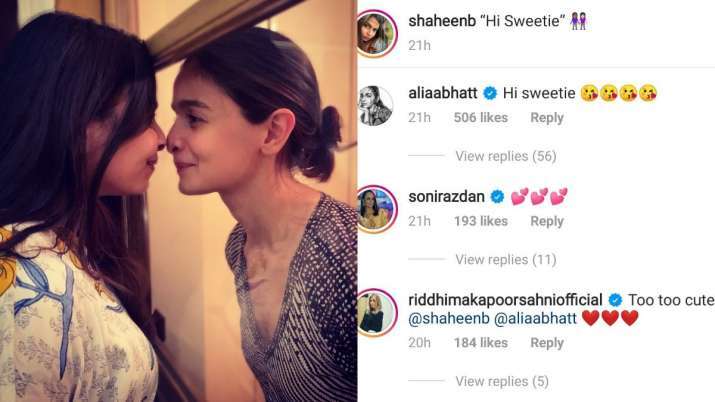 A few days ago, Alia Bhatt broke the internet after she shared a post-workout photo. She flaunted her new haircut in the photo that she got during the lockdown by her 'multitasking beloved'. She wrote, "Yes I cut my hair AT HOME - thanks to my multitalented loved one who rose to the occasion when I was in need of a chop chop."

60 days later - stronger, fitter, better at burpees, much better at skips, much much better at push ups, obsessed with running, super obsessed with eating right and waiting to get back onto the next challenge. Dear @sohfitofficial don’t know what I would’ve done without you’.. you guys are just the best @nonie.tuxen ❤️ #sohfit40daychallenge P.S - Yes I cut my hair AT HOME - thanks to my multitalented loved one who rose to the occasion when I was in need of a chop chop 💇‍♀️💜

During the lockdown, Alia and Ranbir featured in a short film called Family. Directed by Prasoon Pandey, the two actors shot each other at home for the film. The director revealed, "Ranbir and Alia went behind the camera for each other. Everyone was so gracious."

On the work front, Alia is loaded with Bollywood films. She is currently gearing up for the release of her upcoming film Brahmastra with Ranbir Kapoor. She had been shooting for Sanjay Leela Bhansali’s Gangubai Kathiawadi before the lockdown. She also has her father Mahesh Bhatt’s Sadak 2 alongside Aditya Roy Kapur and Karan Johar's multistarrer Takht in the pipeline. Alia Bhatt will also be seen in a special role in Bahubali fame director SS Rajamouli's upcoming film RRR.