Rhea Chakraborty offered to help amid the second wave of covid-19. She said that ‘help is help’, whether big or small.

The coronavirus cases in India are rapidly increasing day by day. The second wave of Covid-19 is even more dangerous and infectious. This is probably the worst health crisis India is facing. Many Bollywood celebs have stepped in to help citizens in finding oxygen cylinders, plasma and other necessities for those facing COVID-19. Now, actress Rhea Chakraborty on Friday offered to do her bit to help tackle the second wave of the Covid-19 pandemic. The actress took to her social media and urged her fans to help people who are in need, adding that ‘help is help’, whether big or small.

Taking to Instagram Stories, Rhea wrote, "Tough times call for unity, help all those that you can… Small help or big help, help is help... Dm me if I can help in any way... will try my best... take care, be kind... Love and strength." 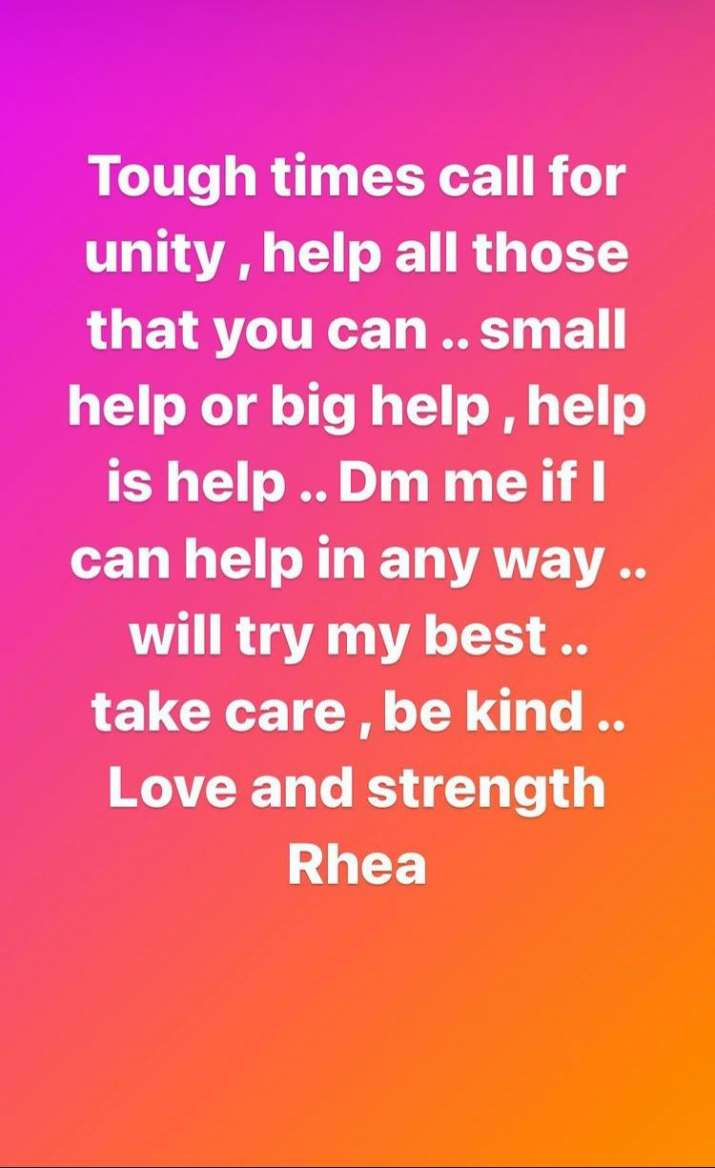 Recently, Rhea took to her Instagram to share a hope-filled message with her fans. She shared a picture of herself dressed in a yellow kurta, reading poet Rabindranath Tagore's collection of poems, "Gitanjali". She wrote: "The question and the cry "Oh, where?" melt into tears of a thousand streams and deluge the world with the flood of the assurance, "I AM!" -- Rabindranath Tagore, Gitanjali #keepingthefaith."

Rhea has largely kept away from social media after her boyfriend Sushant Singh Rajput’s death in June last year. She had been in the headlines after Sushant's death. The duo was said to be dating and the late actor's family accused Rhea of abetting suicide. The NCB came into the picture in August 2020 after the Enforcement Directorate (ED) stumbled on the drugs aspect of its probe into the financial angles surrounding the death. Soon after the investigation, Rhea and her brother Showik were arrested.

Meanwhile, the actress is part of the film "Chehre" starring actors Amitabh Bachchan and Emraan Hashmi. This is her first film release after Sushant's death. The actress was missing from the first poster and teaser of the film, which sparked off rumours of her being ousted from the project. However, producer Anand Pandit says the team steered clear of mentioning Rhea Chakraborty's name in the upcoming film until its trailer launch as they wanted to give the actor some space from public scrutiny.  she is part of the trailer.