Raveena Tandon, who made her acting debut in 1991 with Pathar Ke Phool co-starring Salman Khan, is celebrating her 47th birthday on Tuesday. The actress received heartfelt wishes from her fans and friends from the Bollywood industry.

As Bollywood actress Raveena Tandon turned 47 on Tuesday (October 26), several members of the film fraternity extended their heartfelt greetings for the actor on her special day. A slew of celebrities including Shilpa Shetty, Rakul Preet Singh and others took to their respective social media handles to wish the birthday girl. Shilpa took to her Instagram Story and posted a video in which she and Raveena can be seen shaking a leg together, dressed in glamourous sarees.

Along with the video, she penned the message, "Chura ke dil mera, chali tu chali. Happy happy birthday to you, my darling @officialraveenatandon. Wishing you tons of love, dher saara good health, and even more smiles on your special day!"

Rakul also took to her Instagram Story and posted a picture of Raveena in a chic avatar. Along with the photo, she wrote, "Happy birthday Raveena Ma'am. May you have an amazing year full of love and joy!"

Manish Malhotra, on the other hand, shared a selfie with Raveena in which the two can be seen dressed in ethnic outfits. He added the message, "Happy birthday my dearest @officialraveenatandon." 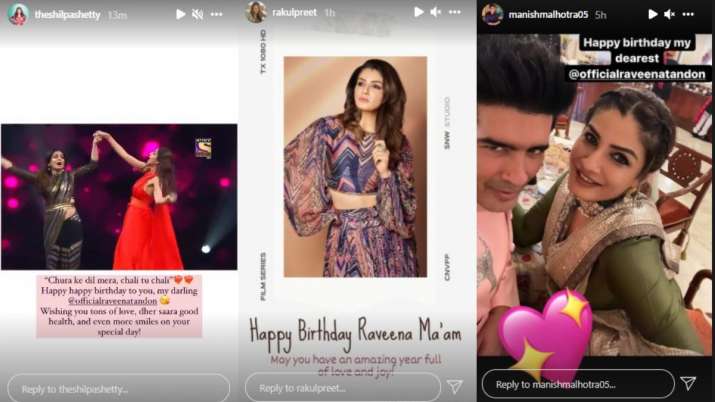 Several other celebrities extended birthday wishes for the actor on social media.

Meanwhile, Raveena, who made her acting debut in 1991 with Pathar Ke Phool co-starring Salman Khan is gearing up for the release of her digital debut 'Aranyak' and 'K.G.F Chapter 2.' The actress will be seen playing the role of politician Ramiya Sen in KGF that also features Sanjay Dutt, Srinidhi Shetty, Prakash Raj and Anant Nag.

Also Read: Happy Birthday Raveena Tandon: 7 superhit songs of the actress that made every 90s kid her fan