On Neetu Kapoor's birthday, wishes pour in from Riddhima, Ranbir Kapoor and others

Neetu Kapoor is celebrating her 63rd birthday today on July 8. Now that veteran actor Rishi Kapoor is no more, her daughter Riddhima Kapoor Sahni and son Ranbir Kapoor are making it sure that they make the occasion a special one for their mother.

Veteran Bollywood actress Neetu Kapoor is ringing in her 63rd birthday today on July 8 but sadly this time it will be without her husband Rishi Kapoor who passed away on 30th April 2020. Ever since his demise, their daughter Riddhima Kapoor Sahni has been taking care of her mother. On the occasion of Neetu Kapoor's birthday, Riddhima made sure that their day is full of surprises and the celebrations began a day back. Not only this, but the latest picture she shared on social media also shows how the 'Barfi' actor joined the mother-daughter duo for the celebrations. Be it her Instagram story or timeline, it is filled with adorable photos depicting that she is making sure her mother's birthday becomes a special one for her.

Riddhima took to the photo-sharing application to post a selfie with her mom and brother and the trio can be seen happily smiling for the camera. Neetu, as usual, looked graceful in a black attire while Riddhima wore a white ensemble. Ranbir was seen sporting a cool avatar wearing a green shirt with floral print. Captioning the post, Riddhima wrote, "Happiest bday my Iron Lady I love you so much Ma (a heart emoji)." Have a look at the post here:

Happiest bday my Iron Lady I love you so much Ma ❤️

A post shared by Riddhima Kapoor Sahni (RKS) (@riddhimakapoorsahniofficial) on Jul 7, 2020 at 11:36am PDT

Anushka Sharma penned down her thoughts in a wish and wrote, "Happy Birthday! Your spirit & positive outlook towards life is special and inspiring. Wishing you lots of peace and happiness on your day." 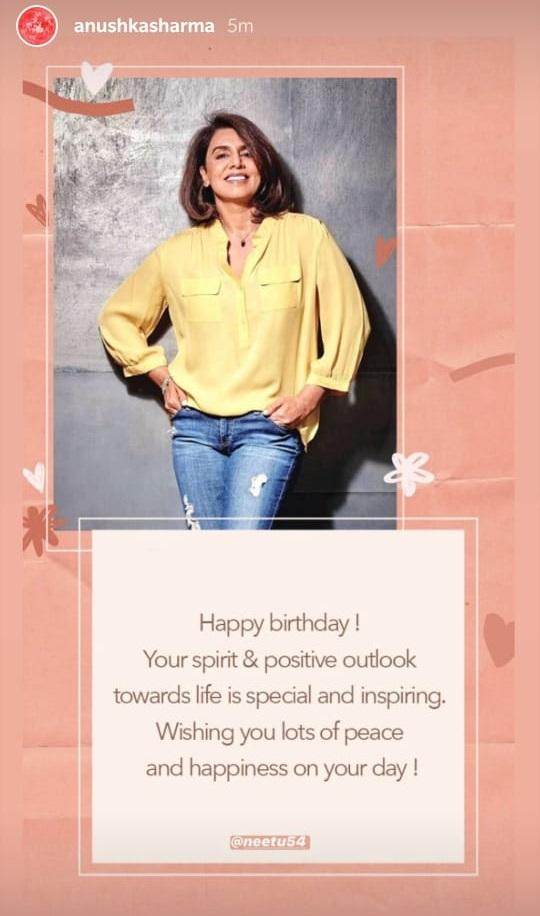 Because of the COVID-19 pandemic, the celebrations could not be a big one for them. However, their little efforts would have definitely bought a smile on the 'birthday girl's' face. Just yesterday she shared a string of photos on her Instagram stories featuring her mother with her daughter Samara Sahni. In another picture, Neetu Kapoor can be seen posing next to balloons. 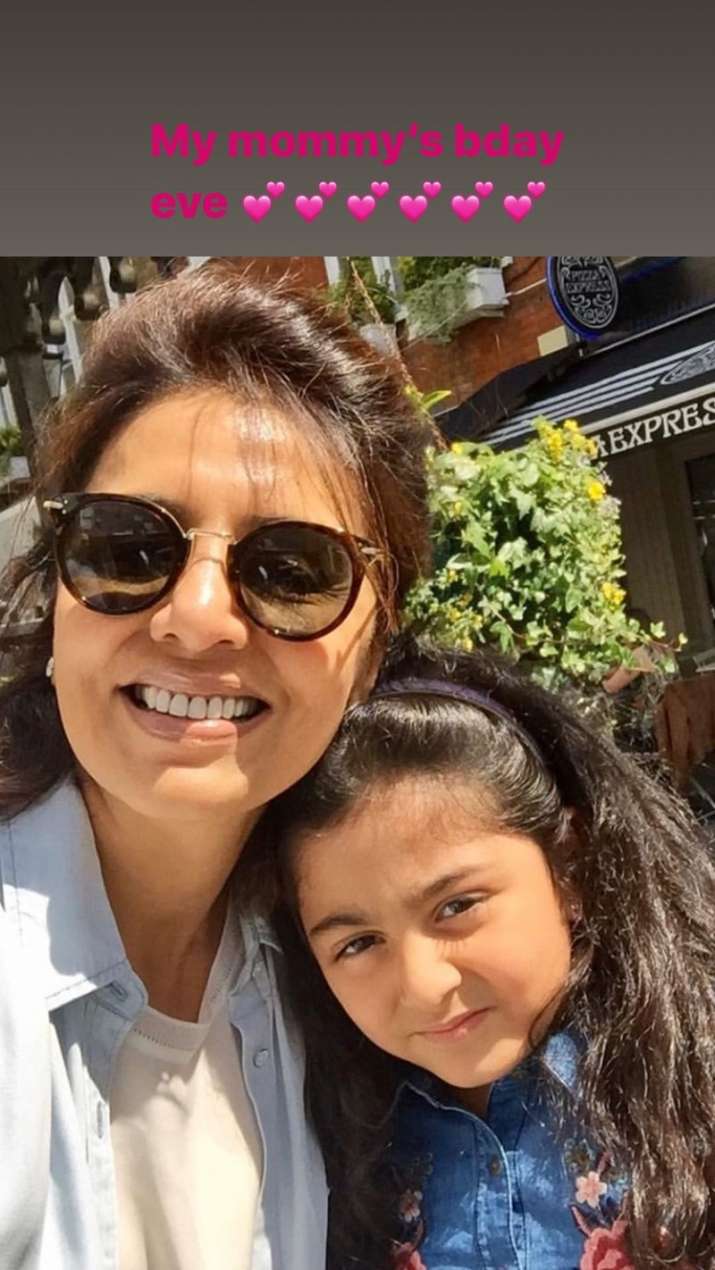 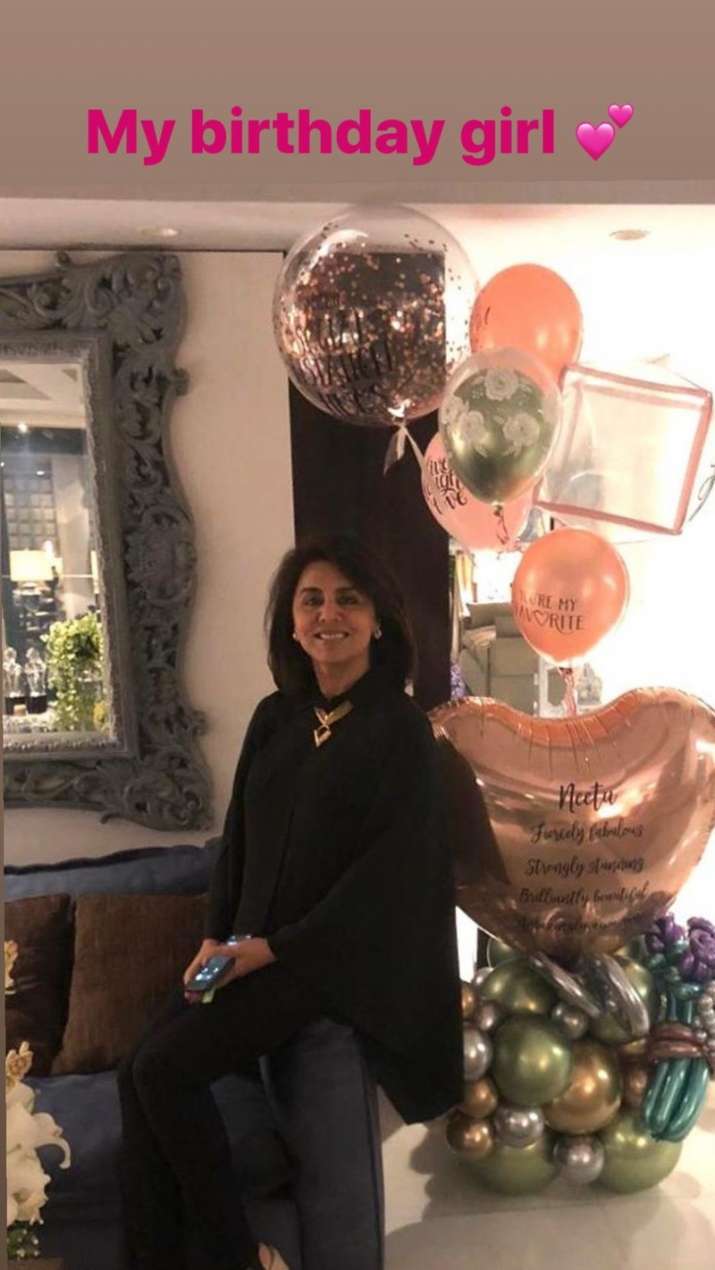 Not only this, she even shared a selfie clicked with her mom as the duo posed in front of a warming fireplace. Next came in line a heart-warming black and white photo of the mother and daughter. Riddhima even shared a glimpse from the birthday dinner and wrote, "Mom’s bday eve dinner (heart emoji) #dinnerready."

A post shared by Riddhima Kapoor Sahni (RKS) (@riddhimakapoorsahniofficial) on Jul 7, 2020 at 7:10am PDT 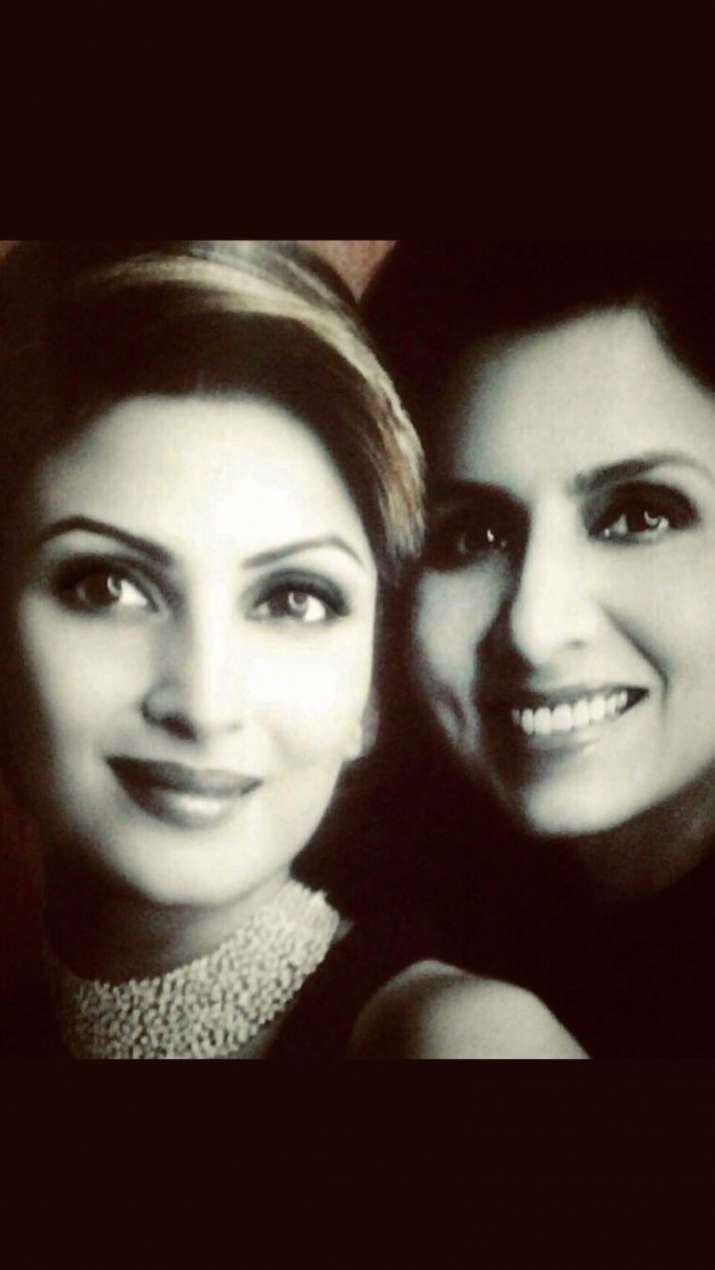 Riddhima seems to have gifted Neetu Kapoor a puppy named Doodle, the pictures of which are been posed by both Neetu and Riddhima on their respective social media accounts. Neetu Kapoor recently introduced her fans to Doodle through a photo and a caption reading, "Can't thank Riddhima enough for this cute button Doodle." Take a look:

Our lil arrogant Dudley has become quite loving with Doodles entry !!! Always stay humble as life is quite unpredictable you never know what your tomorrow has in store for you 🐶🐼🥰

On the work front, Neetu Kapoor has worked in over 50 films and her last project 'Besharam' starring Ranbir Kapoor which released in the year 2013. Talking about late Rishi Kapoor, he passed away after a prolonged battle with cancer.