Showing his gratitude for the love that the fans had showered on him, Kartik Aaryan chose a line from his currently trending song Shayad and wrote, “Jo tum Na ho Rahenge Hum nahi."

Kartik Aryan has become the first choice of filmmakers these days. With each of his films, he is making his place in the hearts of people. The actor’s has earned such a huge fan following that the moment he stepped out to promote his upcoming film Love Aaj Kal, they surrounded him and blocked his way. The actors shared a video on social media in which people in hundreds is seen surrounding him on the road that the actors had to climb on the top of eth car to greet them.

Showing his gratitude for the love that the fans had showered on him, Kartik chose a line from his currently trending song Shayad and wrote, “Jo tum Na ho Rahenge Hum nahi ...Overwhelmed” Check out the video here-

🎶Jo tum Na ho Rahenge Hum nahi 🎶 Overwhelmed 🙏🏻❤️ ... #Repost @viralbhayani THIS IS EPIC! Kartik Aaryan gets mobbed by a huge crowd on the sets in Mumbai, where even his car also couldn’t move. This Love Aaj Kal star’s fan following is touching the roof #kartikaaryan

Karthik Aryan will soon be seen in Imtiaz Ali's film Love Aaj Kal with Sara Ali Khan. The film is scheduled to release on 14 February. The trailer of the film has been released, which people have liked very much. A song from the film has also been released. On Friday, Sara and Kartik took to social media to share the happiest news with her fans that the song Shayad has become the most viewed song in the last 24 hours. 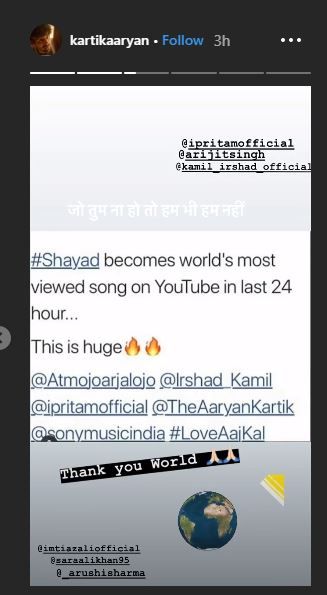 Talking about the response to the song, Imtiaz in a statement said, "I believe there is something magical in the world. It’s not absolute, it can only be experienced, it’s ‘Shayad’. I’m glad that people are connecting with the innocence and nostalgia of this song."

"'Shayad' is an ode to young love. With 'Shayad' we tried to create a soundtrack that imbibes its timelessness," Pritam added.

Love Aaj Kal presents a contemporary and relatable portrayal of two love stories - one set in Udaipur in the early 90s and the other in modern-day Delhi.