After almost seven months of giving birth to her second son Jeh, Kareena Kapoor Khan has returned to the sets of her upcoming film 'Laal Singh Chaddha'.

Kareena Kapoor Khan is quite active on social media where she keeps on sharing frequent updates for her fans. After almost seven months of giving birth to her second son Jeh, the actress has returned to the sets of her upcoming film 'Laal Singh Chaddha'. On Sunday, Bebo took to Instagram Story and posted a few pictures from her vanity van. In one of the images, she can be seen getting her make-up done by her team. "Lal Singh Chaddha," she captioned the post with a red heart emoji. 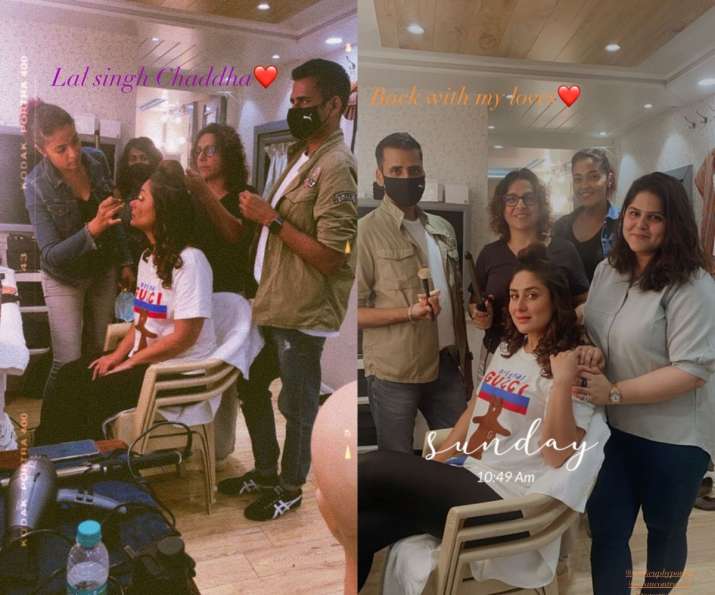 Directed by Advait Chandan, 'Laal Singh Chaddha' is an official Hindi remake of the Oscar Award-winning 1994 film 'Forrest Gump', which featured Hollywood star Tom Hanks in the titular role. Besides Kareena, the Hindi version also features Aamir Khan in the lead role. Telugu actor Naga Chaitanya is also playing the role of an army officer. This is the first Bollywood film for Naga Chaitanya, son of leading Tollywood actor Nagarjuna. Also, the film stars Mona Singh in a pivotal role.

The major portions of the film were shot in Punjab and Ladakh. Speaking of the release date, 'Laal Singh Chaddha' will arrive in theatres this Christmas. It was in 2018 that Aamir Khan bought the rights of the film and officially launched production in 2019.

Meanwhile, Kareena recently launched her book 'Pregnancy Bible', which captures her physical and emotional experiences from both her pregnancies. The 'Jab We Met' star is also set to make her debut as a producer with director Hansal Mehta's yet-to-be-titled thriller. She will also act in the film.

Also Read: PM Modi offers condolences to Akshay Kumar after his mom's demise; actor says he is grateful for the gesture