Mumbai Drug Case: Karan Patel said that Aryan Khan was being used to target Shah Rukh Khan. The star kid was arrested on October 3. He is currently in judicial custody and lodged at the Arthur Road prison.

Popular TV actor Karan Patel has come out in support of Bollywood superstar Shah Rukh Khan and his son Aryan Khan in a case related to the seizure of drugs following a raid at a party on a cruise ship off the Mumbai coast. The actor claimed that Aryan was being used to target Shah Rukh. Taking to his Instagram Stories, Karan wrote "Using the ‘Prince’ to get back at the ‘KING’ is the most coward and shameful act that can be. Just because you needed a dark spot to hide a bigger issue, You are trying to stop the ‘Son’ from shining, well, you can’t... It’s in his genes. #ImWithSRKAlways." To complete his post, Karan added, '#AfewThousandKilos vs #AnEmptyDuffleBag.' 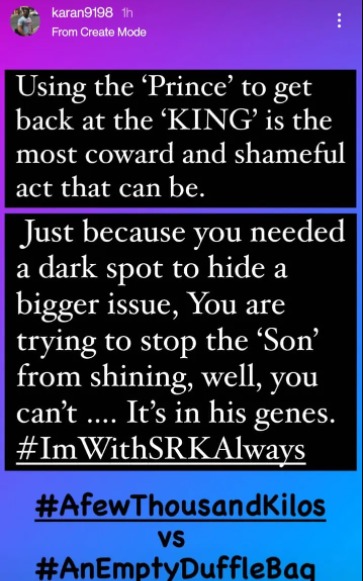 Meanwhile, a Special Narcotic Drugs and Psychotropic Substances Act (NDPS) court in Mumbai on Monday (October 11) said that it would hear on Wednesday the bail plea of Aryan Khan, accused in the Mumbai cruise drug bust case. A Mumbai Magistrate court had on October 7 sent Aryan Khan and seven others to judicial custody for 14 days. Mumbai Drug Case: Who is Imtiaz Khatri? Film producer once again under NCB radar after SSR case

Aryan Khan was arrested on October 3. He is currently in judicial custody and lodged at the Arthur Road prison in Mumbai. The star kid has been charged with offences under Sections 8(c), 20(b), 27, 28, 29 and 35 of the NDPS Act pertaining to possession, consumption and purchase of drugs.

Neither Shah Rukh nor his wife Gauri Khan has commented on Aryan’s arrest yet. However, from the industry, including Pooja Bhatt, Raj Babbar, Hrithik Roshan, Sussanne Khan, Hansal Mehta and others supported the father-son duo.

A total of 20 people, including two Nigerian nationals, have been arrested so far in the case related to the seizure of drug. In the high-drama rave party raid on October 2, the NCB had stated that it recovered drugs like 13 grams cocaine, 21 gms charas, 5 gms MD, and 22 MDMA pills in the operation from the accused, most of whom are linked to the glamour and entertainment industry.