Prime Minister Narendra Modi announced that the government has decided to repeal the three farm laws. Addressing the nation on the occasion of the Parkash Purab of Sri Guru Nanak Dev, PM Modi said that in the coming Parliament session, the government will take constitutional measures to repeal these farm laws. Here's what the celebs has to say about the same.

Prime Minister Narendra Modi on Friday (November 19) announced that the government has decided to repeal the three farm laws. Hailing PM Modi's decision, Bollywood celebrities including Taapsee Pannu, Richa Chadha, Himanshi Khurana, Kangana Ranaut and others took to their social media and voiced their opinion on the same. Taapsee was among the first to hail the decision. She also took this as an opportunity to wish everyone on Gurunanak Jayanti. On the other hand, Richa Chadha termed the decision as farmers' victory.

Calling it a wonderful news, Sonu Sood wrote "This is a wonderful news! Thank you, @narendramodi ji, @PMOIndia , for taking back the farm laws. Thank you, farmers, for raising just demands through peaceful protests. Hope you will happily return to be with your families on the Parkash Purab of Sri Guru Nanak Dev Ji today."

Sharing a person's tweet about the repeal, Kangana on her Instagram wrote, "Sad, shameful, absolutely unfair. If people on the streets have started to make laws and not the chosen government in the Parliament, then even this is a jihadi nation. Congratulations to all who wanted it like this." 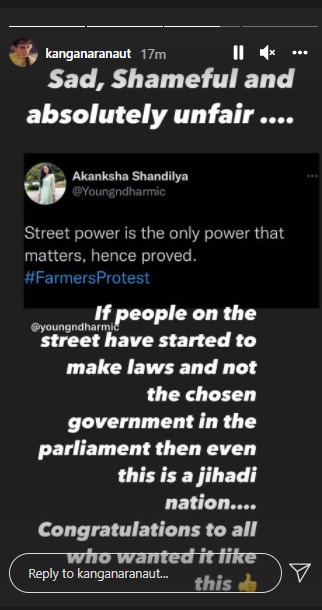 The three farm bills were passed in the monsoon session of Parliament, the President had given his assent to these Farm Bills on September 27, 2020. These were Farmers' Produce Trade and Commerce (Promotion and Facilitation) Bill, 2020, Farmers (Empowerment and Protection) Agreement on Price Assurance and Farm Services Bill, 2020 and Essential Commodities (Amendment) Bill 2020.