Kangana Ranaut uploaded a video on Twitter and praised Deepika Padukone's film Chhapaak and revealed how it reminded her of sister Rangoli Chandel's acid-attack incident.

The trailer of Deepika Padukone's upcoming film Chhapaak has touched the hearts of many. The film telling the story about the struggles of an acid attack survivor has impressed not just her fans but also many of her Bollywood counterparts. One amongst those is actress Kangana Ranaut, who is well known for speaking her heart and mind out. Yet again she did the same when she gave her review of the trailer by uploading a video on her social media, recalling the unpleasant incident that took place with her sister Rangoli Chandel which shooked everyone and changed their lives.

Kangana, in the video that was uploaded on Twitter, thanked Deepika and director Meghna Gulzar for making a film on acid attack violence and prayed that in the new year, the sale of the attack stops and things change for a better in the society. Calling the film a slap on the face of the perpetrators, Kangana wrote, "The pain still lingers. Our family thanks team #chhapaak for a story that needs to be told! @deepikapadukone @meghnagulzar @foxstarhindi."

The pain still lingers. Our family thanks team #chhapaak for a story that needs to be told! @deepikapadukone @meghnagulzar ⁦@foxstarhindi⁩ pic.twitter.com/drKN3i6GSP

When the trailer of the film came out, even Rangoli praised it and said that she felt as if her own story was being told. Meanwhile, the Padmaavat actress is these days busy promoting her film and was recently in the capital where she took part in the peaceful protests going on at the JNU campus.

Deepika is at the JNU to stand in solidarity with the students❤️❤️ I am so proud of my Queen!❤️ (Where are the haters at now?) (@deepikapadukone #DeepikaPadukone #GainLikes #GainFollowers) 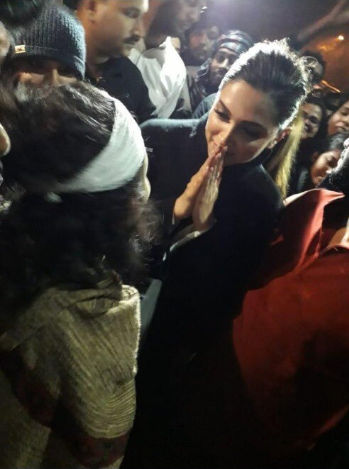 Talking about the film, it also stars Vikrant Massey opposite the actress. The film is all set to release on January 10, 2020 and will see a clash with Ajay Devgn, Kajol and Saif Ali Khan's Tanhaji: The Unsung Warrior.