Kamya Panjabi blasts troll who mocked her for failed marriage: ‘Should women die after divorce?’

Kamya Panjabi was married to Bunty Negi for ten tears. The two tied the knot in 2003 and headed for a divorce in 2013. After her divorce from Bunty, Kamya married her boyfriend, a Delhi-based doctor Shalabh Dang, on 10 February 2020.

Former Bigg Boss contestants and actress Kamya Panjabi recently blasted a troll who mocked her for her failed marriage. She retorted back asking 'should women die after a divorce and went on to say she has the right to be happy. The comment was posted on a video shared by Kamya on Instagram on Wednesday, in which she advocated about women empowerment. “Ek apni shaadi to bacha ni payi talaq ho gya. Fir dusri shadi...had hai (You could not even save your own marriage. You got divorced, and then married for the second time. This is the limit)," the comment on the post read.

With a sharp remark, Kamya responded by saying “So? Mujhe khush rehne ka ya jeene ka koi haq nahi hai? Talaq ho gaya toh aurat ko marr jaana chahiye? Talaq se zindagi khatam ho jaati hai aurat ki? Aap jaisi soch rakhne waalo ke khilaaf aaj harr ladki ko apni awaaz uthani padegi our utha bhi rahi hai... Mujhe kamzor naa samajna main ladki hoon lad sakti hoon (Do I have no right to stay happy? If divorced, should a woman die? Divorce is not the end of one’s life. Every girl needs to raise her voice against people with a mindset like yours. And, they are raising their voices. Do not think of me as weak. I am a woman and I can fight).” 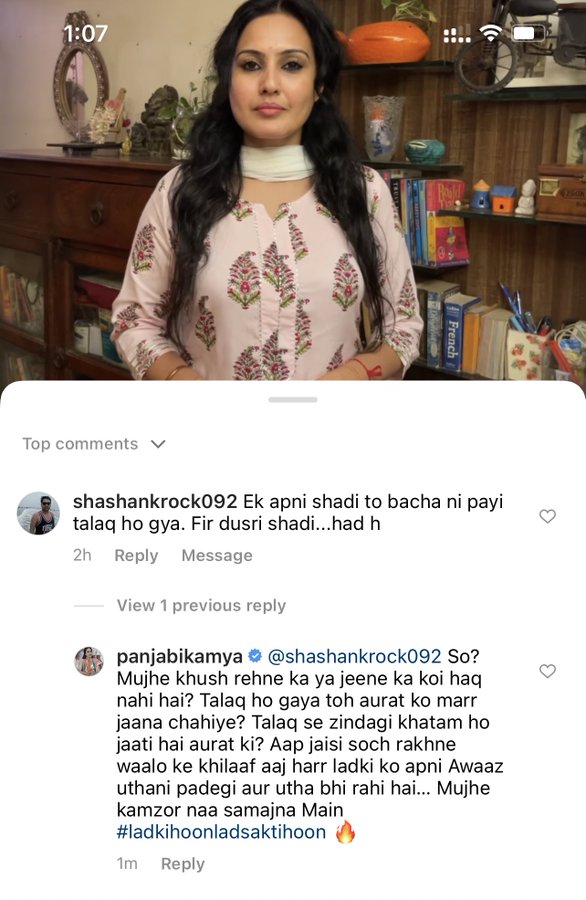 For the unversed, Kamya Panjabi was married to Bunty Negi for ten tears. The two tied the knot in 2003 and headed for a divorce in 2013. Kamya and Bunty also have a daughter named Aara, who they welcomed to the world in 2009.

After her divorce from Bunty, Kamya married her boyfriend, a Delhi-based doctor Shalabh Dang, on 10 February 2020. Shalabh had a son from his previous marriage, Ishaan.