Hrithik Roshan's debut Kaho Na Pyaar Hai was tailor-made perfection for a debutant. The film became a blockbuster and light-eyed Hrithik took over the imagination of Bollywood fans. The actor became a superstar overnight and his fan following put him among the A lister actors from the very first film. While many slammed him as someone who could only succeed in his father's films but Hrithik was determined and with films like Koi Mil Gaya, Kabhi Khushi Kabhi Gham, Dhoom 2 and Guzaarish, he proved there's a lot more to him than being just a one-film wonder.

Kaho Na Pyaar Hai celebrated 20 years of its release on January 14 and this was a nostalgic moment for Hrithik. With 2020, Hrithik also marked 20 years of his Bollywood career and the actor took to Instagram and defined his journey in two words 'fear', 'fearless' -- and through the story of David and Goliath summed up his journey of 20 years.

. I think the 2 emotions which best describe my journey of the past 20 years since KNPH, is simply “Fear” and “Fearless” both existing simultaneously and never one devoid of the other . . . On the face of it , Fearless is a David . Fear is more a Goliath . But no matter how many times you repeat the story or in how many different ways, David still always defeats Goliath. . . I feel terribly bad for fear . Cause it tries so hard . Fearless is a smart cookie , it only follows one rule . To keep going. . . Thanks Fear. If not for 20 years of you , I’d never have lived my 20 years of Fearless. . . #20yearsofKNPH #Repost @hrfc.rajasthan KNPH to WAR - @hrithikroshan Credit: Sako .

Hrithik's ex-wife Sussanne reacted by commenting, "What an amazing metamorphosis.. your only getting better and better, with wisdom and love being your two 'best friends.'" 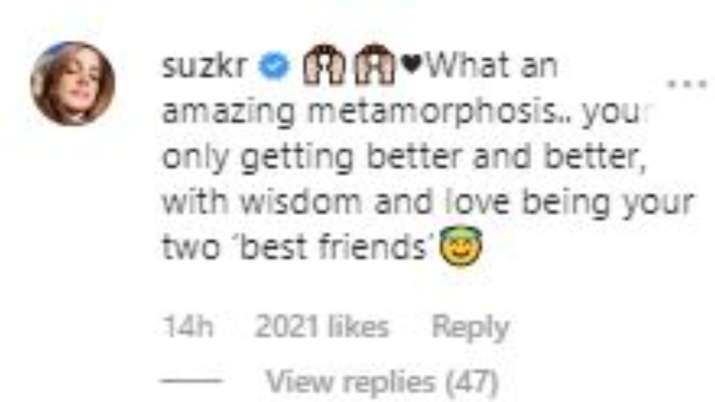 Hrithik was last seen with Tiger Shroff in Yash Raj's War. Looking at his power-packed action and gorgeously good physique, it's hard to believe that it's already 20 years since we first saw him on screen. War went on to become the biggest Box Office hit of 2019.

Hrithik hasn't signed a new project as yet.