Bollywood actor Disha Patani is all praise for her rumoured beau and actor Tiger Shroff, who has released reprised version of the patriotic song 'Vande Mataram' on Tuesday.

Bollywood actor Disha Patani is all praise for her rumoured beau and actor Tiger Shroff, who has released reprised version of the patriotic song 'Vande Mataram' on Tuesday. The actors who have shared screen space in the film- 'Baaghi 2', and the romantic song 'Befikra', have been rumoured to be in a relationship for a while now, but both the stars have remained tight-lipped about their romance.

However, the two keep on pushing social media into a frenzy with their comments exchange on their Instagram posts. The recent IG story of Disha did the same on Tuesday as she sweetly praised Tiger for his song 'Vande Mataram'. Sharing the song, she wrote, "Such soothing voice, you are unbelievable @tigerjackieshroff," using a tiger face emoticon.

Replying to Disha on his IG story, Tiger wrote, "Thank you so much D," with a red heart emoticon. 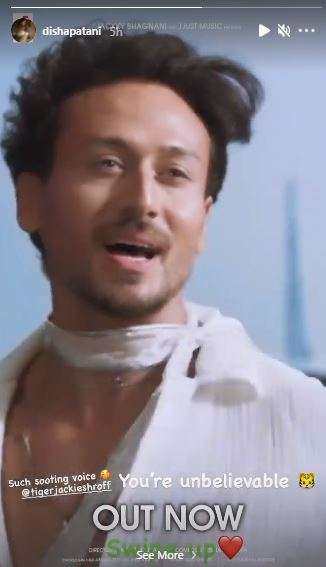 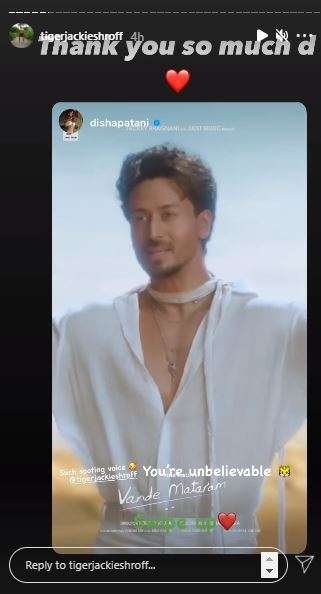 Not just Disha, legendary singer Asha Bhosle is also all praise for the song. She shared on Twitter, "Music is beautiful. Music about my country, even more so"

Crooned by Tiger himself, the actor's patriotic song 'Vande Mataram' has arrived just a few days before India celebrates its 75th Independence Day. Presented by Jackky Bhagnani's Jjust Music, 'Vande Mataram' is directed by Remo D'souza and composed by Vishal Mishra. The song celebrates the patriotic spirit of Indians and salutes the defence forces of the country. The music video also has visuals of Prime Minister Narendra Modi at the Amar Jawan Jyoti, Delhi.