Diljit Dosanjh dedicates new song RiRi to Rihanna after her tweet on farmers protest, calls her an angel

Actor and singer Diljit Dosanjh has released a new song in honor of pop star Rihanna on Wednesday.

Actor and singer Diljit Dosanjh has released a new song in honor of pop star Rihanna. The two-minute fifteen-second song is titled RiRi, a reference to the singer's nickname. RiRi has been written by Raj Ranjodh with music by Intense. The song was released shortly after Rihanna's tweet on the ongoing farmer's protest, which drew a lot of public attention. The international pop star shared an article on Farmers protest and tweeted, "What aren't we talking about this?!#FarmersProtest".

The song is sung in the Punjabi language. Diljit talks about Rihanna's home country Barbados. He calls her an angel who has descended from the heavens. Diljit is all praises for her beauty.

Earlier, he also shared a picture of American singer Rihanna on his Instagram Stories. He did not add any caption to it instead added a background song of Rihanna, Run This Town. 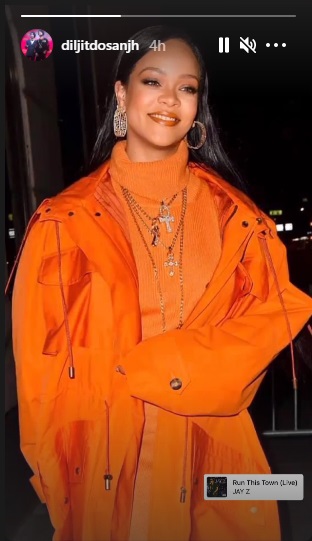 Diljit also shared a Punjabi proverb on Twitter and wrote: "Jaat Di Kohr Kirli, Shateeriyan Nu Jaffe... (which in English means that your status in life is rather insignificant but you know how to talk big)."