As the 2006 action-thriller 'Dhoom 2' clocked 14 years on the horizon of Indian cinema, a lot of actors including Bipasha Basu, Hrithik Roshan and others like choreographer Shiamak Davar, music composer Pritam, writer Acharya recalled the memories of how and what happened during the shooting of the project.

As the 2006 action-thriller 'Dhoom 2' clocked 14 years on the horizon of Indian cinema, a lot of actors including Bipasha Basu, Hrithik Roshan and others like choreographer Shiamak Davar, music composer Pritam, writer Acharya recalled the memories of how and what happened during the shooting of the project. Bipasha, on Tuesday reminisced about playing a double role in the film. The 'Alone' actor shared a video reel announcing the 14-year anniversary of the film featuring some of the scenes from the action entertainer. She complimented the video reel with a short note about the experience she had while preparing for the film.

"I know everyone loved watching #dhoom2. The experience of prepping and shooting for this film was simply amazing. And the best co-stars and crew ever," the 41-year-old actor wrote with red heart emoticons. She also extended her thanks to the makers of the film for giving her the opportunity to act in the film. "Thank you Adi, @yrf, @sanjaygadhvi4 for giving me the opportunity to play sharp Shonali Bose and Sexy Cute Monali #14yearsofdhoom2," she added with heart emoticons.

The 59-year-old celebrity choreographer Davar shared on the 14th anniversary of YRF's 'Dhoom: 2'. "In Dhoom: 2, I had Aishwarya Rai and Hrithik Roshan. Being probably the coolest dancers ever, it wasn't very difficult for me to make them look cool because they are cool and I love the fact that I was given a chance to work. I'm very grateful that people find it like a benchmark in the industry for dance. I think I owe a lot to my dancers because when your dancers and the stars look good, then I as a choreographer look good," said Davar.

The second installment of the action franchise saw a charismatic pairing of superstar Hrithik Roshan and Bollywood's diva Aishwarya Rai Bachchan. Recounting his experience of choreographing two of the most good-looking superstars, Aishwarya and Hrithik, who are also phenomenal dancers, Davar said, "You see I'd worked with Aishwarya in Taal and before she became Miss World and I'd worked with her already in a Sufi jazz piece, so she was already quite close to understanding my style & delivering it really well. Hrithik was very new to what I do, but the best part about Hrithik was that he is just so natural and my kind of style on him worked so well."

'Dhoom: 2' songs, especially the title track became a rage of the nation. On which, according to the music composer, he was doubtful. "We never thought that Dhoom will become so big. I remember the day Dhoom was releasing. I was going to Shirdi and on the way, I heard in 2 places - one was a car back horn with the Dhoom Machale tune and the other was somebody in Shirdi was singing it. Then I knew gaana toh popular hogaya (Song became popular). Dhoom was a great gig!" said Chakraborty.

Talking about Hrithik, he shared a poster in his Instagram story giving a glimpse of his different looks in the movie. 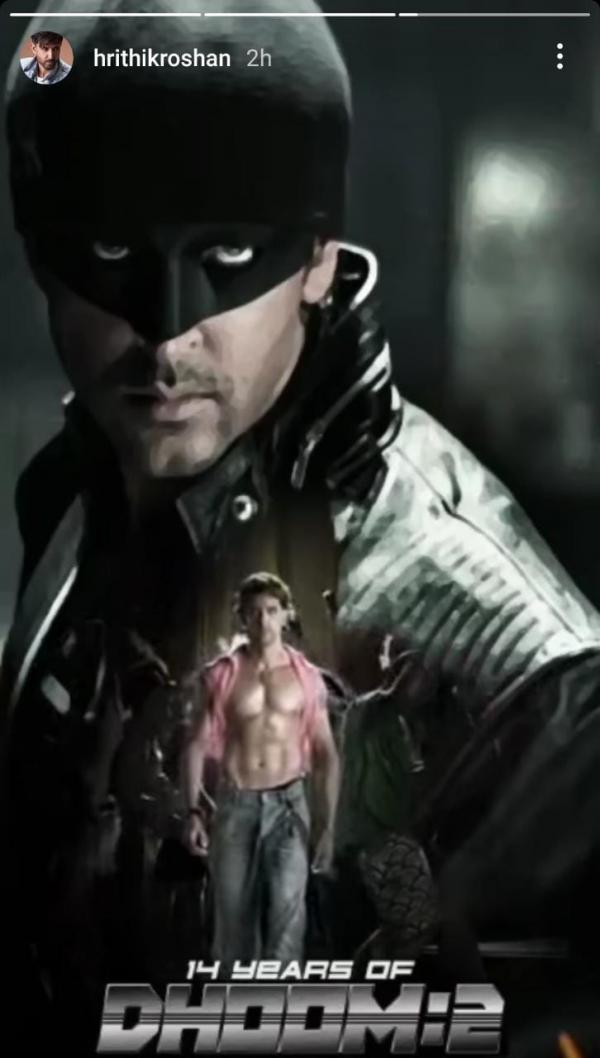