Kartik Aaryan, who made his debut in the industry with Pyaar Ka Punchnama has made his mark in the industry and is celebrating his 31st birthday today. On his special day, the actor took to Instagram and shared a quirky post for his fans and well-wishers asking them to wish him twice. Not only this but a number of celebs including Ekta Kapoor, Anushka Sharma and even fans filled social media with adorable wishes for the budding star.

Kartik Aaryan is these days basking in the success of his recently-released Netflix-thriller 'Dhamaka.' The actor who made his debut in the industry with Pyaar Ka Punchnama has made his mark in the industry and is celebrating his 31st birthday today. He is quite active on social media and keepson treating fans with his latest pictures and videos from various outtings. Yet again, on his special day, Kartik shared a quirky post for his fans and well-wishers and asked them to wish him twice. The actor even shared his photo in which he could be seen wearing a neon green hoody. The caption showed his excitement for his birthday as he wrote alongside, "Phir se birthday aaya Phir se khushiyan laaya Sab 2-2 baar wish karo mujhe !!"

Anushka Sharma took to her Instagram stories and shared a picture of Kartik alongside the wish that read, "Happy birthday Kartik! Wishing you love and light always." 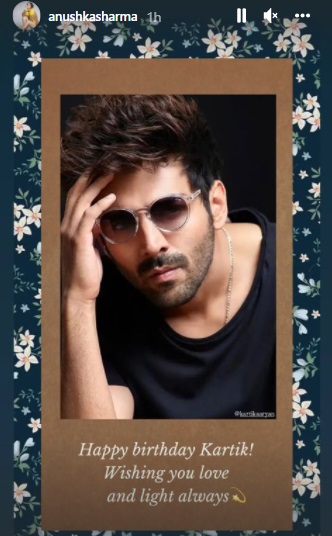 Not just the celebs but also Kartik's die-hard fans filled Twitter with birthday wishes and made hashtag #HappyBirthdayKartikAaryan one of the top trends on Twitter.

Kartik's film 'Dhamaka' has released on Friday on Netflix. The film also stars Mrunal Thakur in a pivotal role. Directed by Ram Madhvani, 'Dhamaka' follows the story of an ambitious ex-news anchor Arjun Pathak, played by Kartik, who is given another chance to go live on prime-time television when a terrorist calls him with a bomb threat. Little does he know that this call will change his life and throw him into a fast-paced game of betrayal.

Meanwhile, on the film front, Kartik has a lot of films in his kitty which includes titles like,'Shehzada', 'Bhool Bhulaiyaa 2', 'Captain India' and 'Freddy'.