As Chennai Express turned 8, actress Deepika Padukone shared an animated video on her Instagram story that features a man resembling Shah Rukh Khan's character Rahul driving a jeep with a woman resembling Deepika's character Meenamma sitting next to him.

Bollywood superstar Deepika Padukone on Sunday marked eight years of her 2013 blockbuster romantic comedy flick 'Chennai Express'. She shared on her Instagram story, an animated video that features a man resembling Shah Rukh Khan's character Rahul driving a jeep with a woman resembling Deepika's character Meenamma sitting next to him. The title track of the movie can be heard playing in the background. Further in the video, a van passes by with a picture of both the actors from the movie on it. Her post came after filmmaker Rohit Shetty shared a motion poster of the film on his Instagram story.

Speaking about Deepika's clip, it ended with the iconic dialogue from the movie "Kaha se khareedi aisi bakwaas dictionary?" 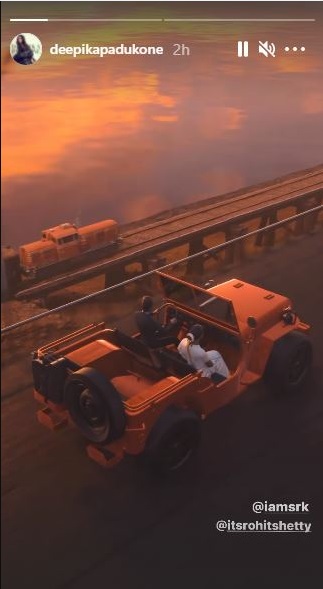 Despite receiving mixed reviews from critics, the 2013 film, which was packed with action, romance, and comedy, became one of the highest-grossing Bollywood films of all time. 'Chennai Express' was produced by Ronnie Screwvala, Siddharth Roy Kapur, Gauri Khan, and Karim Morani.

It was based on a story by K Subash, with a screenplay written by Yunus Sajawal and dialogues by Farhad-Sajid. The film revolves around a Tamil girl Meenamma who falls in love with a North Indian guy Rahul (played by Shah Rukh Khan), who boards the Chennai Express train from Mumbai carrying the ashes of his late grandfather, supposed to be immersed in Rameshwaram, while he intends to go to Goa instead.

Sathyaraj, who is famous for his role as Kattappa from 'Baahubali', also played a supporting role in this film. The music for 'Chennai Express' was composed by Vishal-Shekhar. The film also gained wide popularity for its song 'Lungi Dance', a tribute to megastar Rajnikanth, crooned by Honey Singh.