Actress Lara Dutta as Indira Gandhi in 'Bell Bottom' was a surprise package for everyone. Fans were all praise for the actress and her epic transformation. Here's what her co-star Akshay Kumar has to say about the same.

Bollywood actress Lara Dutta as Indira Gandhi in Bell Bottom was a surprise package for everyone. The actress stunned everyone with her appearance in the trailer and her transformation as the political figure became a topic of discussion. She was almost unrecognisable. Lara amazed the audience as it transformed her into an older and mature character. Fans were all praise for the actress and her epic transformation.

Recently, her co-star in the aforementioned film Akshay Kumar praised Lara for the same. He wrote, ''In my personal opinion, never has an actor carried a look with so much conviction, You've hit this one out of the park not just with your look but performance as well''.

Responding to this, the actress replied, ''@akshaykumae You are my forever hero and my biggest supporter!! When you ask me to step up got something, I'm always going to give it my 100%! Love u always!" 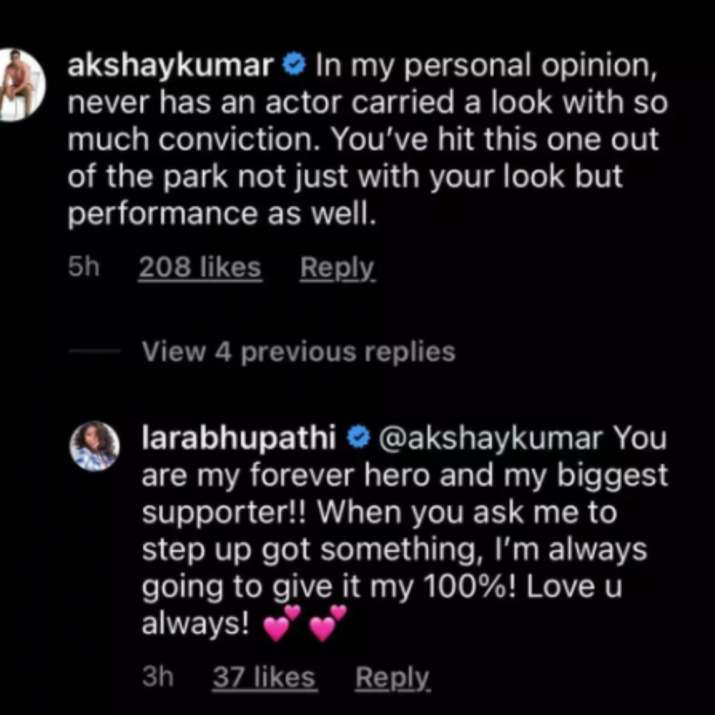 During the trailer launch press conference, Lara Dutta was asked about the character she portrays in the film. The actress initially asked members of the media to guess the character. "If anyone is able to guess, then I will take all their family members free to the theatres," she promised. After much prodding, Dutta said, "So you did see me in the trailer. I'm playing Mrs Indira Gandhi. That's me."

The former Miss Universe revealed that she received a call from the makers about playing the former PM in the movie. "All it took was a call and they said that Lara this film is being made and we are casting for Indira Gandhi''s role. It was before I heard the script...But yes, of course, there is a great responsibility when you're portraying somebody who is an iconic figure like her," she said.

It was a challenge to get the body language of the character right, added Dutta.

Meanwhile, 'Bell Bottom' also stars Vaani Kapoor and Huma Qureshi in key roles. Kapoor, who portrays the wife of Kumar''s character, said she was thrilled to get to shoot a movie during the pandemic.

Speaking about the film, the Ranjit M Tewari directorial is presented by Pooja Entertainment in association with Emmay Entertainment. It is produced by Vashu Bhagnani, Jackky Bhagnani, Deepshikha Deshmukh, Monisha Advani, Madhu Bhojwani, and Nikkhil Advani.