Virat Kohli looks dapper in a pink tshirt and off-white pants while Anushka Sharma makes a statement in a white sweater top and denim in their viral picture from England.

Bollywood actress and producer Anushka Sharma is in England with her daughter Vamika to support her husband Virat Kohli during his five-match test series. She has been actively sharing pictures and photos from beautiful place and breaking the internet every now and then. On Wednesday, another picture of Virushka went viral after they enjoyed their lunch in London.

On Friday, the actress shared an adorable picture of herself and she looked the 'cutest' in it. In the picture, Anushka can be seen sitting in the restaurant. Donning a white sweater, she looked beautiful. Sharing the photo, Anushka dropped a flower emoji in the caption.

In the viral picture, Virat Kohli looks dapper in a pink tshirt and off-white pants while Anushka makes a statement in a white sweater top and denim. She also flaunted a black Prada bag. Along with the duo is chef Rishim Sachdeva who originally shared the picture. Have a look- 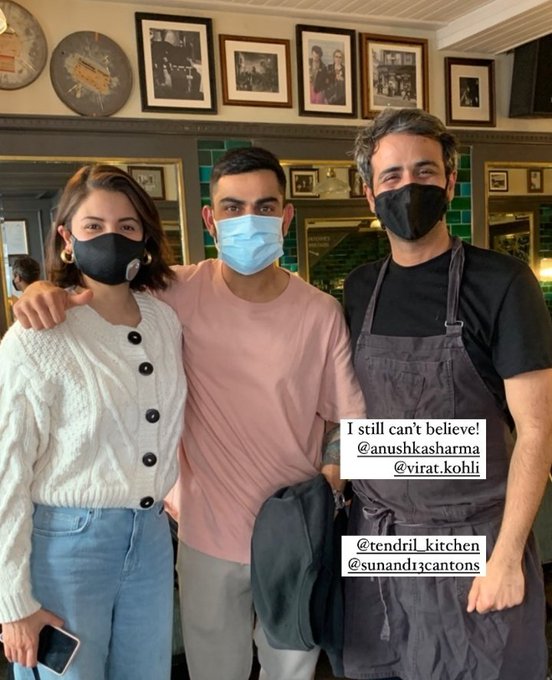 Anushka Sharma has been Virat Kohli's biggest cheerleader. Recently, Indian won the five-match test series against England at the iconic Lords stadium and the actress cheered for the team on social media. Sharing pictures of Kohli, she wrote, "What a win! What a team!" 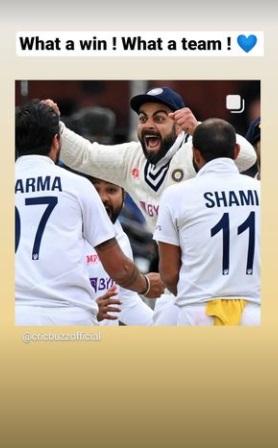 Last month, Anushka posted a series of pictures featuring Virat Kohli getting candid on the streets of England. The series of photos, as well as the caption, had Anushka jocularly referring to Virat as a fan who's chasing her for a picture.

"Was just casually prancing around town. Running a hand through my hair. A fan spotted me. I obliged for a picture. He seemed happy. Anything for my fans! Photo taken by another fan -- @cloverwootton," she wrote as the caption.

Speaking about her work, the actress has two films in the pipeline. She will be seen in Navdeep Singh's "Kaneda", and a biopic of cricketer Jhulan Goswami.

The actress was last seen in the film "Zero" in 2018. She produced the web series "Paatal Lok" and the film "Bulbbul" for OTT last year.