As soon as the picture popped on the internet in which Anushka Sharm and Virat Kohli announced their pregnancy, Bollywood celebrities congratulated the couple in the comments. Anushka's celebrity lookalike, American singer Julia Michaels was also the one who congratulated the NH10 actress on her pregnancy.

Bollywood actress Anushka Sharma left her fans surprised when she announced her first pregnancy with husband Virat Kohli. The actress shared an adorable picture flaunting her baby bump and revealed that the much loved couple is expecting their first child in January 2021. As soon as the picture popped on the internet, Bollywood celebrities congratulated the couple in the comments. Anushka's celebrity lookalike, American singer Julia Michaels was also the one who congratulated the NH10 actress on her pregnancy.

Taking to the comments section of Anushka Sharma's pregnancy post, Julia Michaels wrote, "Congrats twin!" Announcing the pregnancy, Anushka and Virat had written, "And then, we were three! Arriving Jan 2021" 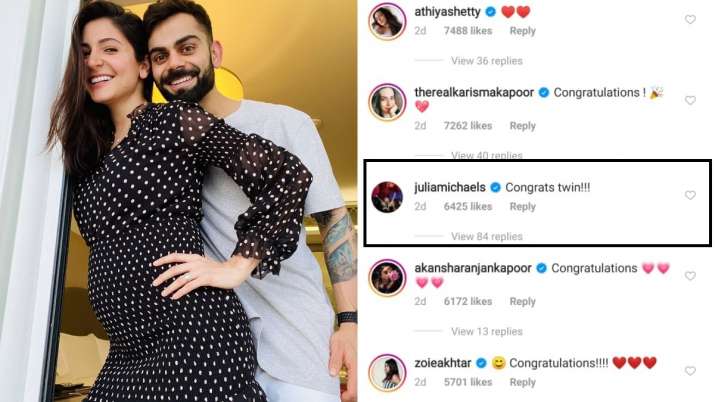 American singer Julia Michaels was talk of the town last year due to her striking resemblance with Bollywood actress Anushka Sharma. When the singer's pictures in comparison to Anushka went viral, she decided to connect with her doppelganger and tweeted a 'Hi' to the Pari actress.

Julia had tweeted a collage of their photographs and captioned it: "Hi Anushka Sharma, apparently we are twins." The Indian actress acknowledged the message and wrote: "OMG Yes! I have been looking for you and the remaining five of our doppelgangers all my life."

OMG YES!! 😲 I've been looking for you and the remaining 5 of our dopplegangers all my life 😂 https://t.co/SaYbclXyXt

On the professional front, Anushka Sharma was last seen in Aanand L. Rai directorial Zero also starring Shah Rukh Khan and Katrina Kaif. Soon after the release of the film, the actress flew away to Australia to spend some quality time with her husband Virat Kohli and took a break from acting. However, she has been active as a producer. Anushka's Clean Slate Films treated the viewers with two web shows during the lockdown-- Pataal Lok and Bulbull.