The picture shows Nagarjuna, his wife Amala, sons Chaitanya and Akhil and Love Story director Sekhar Kammula, all cutting a cake with Aamir at their Hyderabad home.

Amidst rumours of separation between Tamil film superstars Samantha Akkineni and Naga Chaitanya, a picture from a meet-up of Nagarjuna,  Chaitanya with actor Aamir Khan and others is going viral on the internet. The picture is from the dinner that was hosted by Nagarjuna Akkineni and his family for Khan earlier this week. 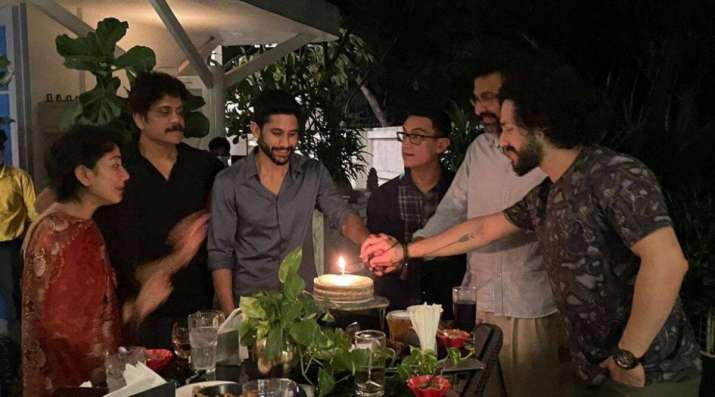 The picture shows Nagarjuna, his wife Amala, sons Chaitanya and Akhil and Love Story director Sekhar Kammula, all cutting a cake with Aamir at their Hyderabad home. It is reported that Chaitanya's wife, actor Samantha Akkineni did not attend the family dinner. This has further fueled the rumours the couple are living separately.

Chaitanya who is currently in the headlines for his new film Love Story with Sai Pallavi will soon be sharing screen space with Aamir in Laal Singh Chaddha. Bollywood superstar was recently in Hyderabad to promote Chaitanya's film.

Naga Chaitanya and Samantha's personal life is being discussed widely for the past few days after speculations that all is not well between the two. In a recent interview with Film Companion, Chaitanya said he chooses to focus on his work amid it all.

“Initially, yes, it was a little painful. I was like ‘why is entertainment heading this way?’ But after that, what I've learned is that in today's age, news replaces news. Today there's one news, tomorrow there's another news, today's news is forgotten. But in my grandfather's time, there were magazines, and magazines used to come once in a month."

Rumours of their divorce started doing the rounds when Samantha dropped 'Akkineni' from her social media accounts.