Ahead of Chehre release, Rhea Chakraborty shares an optimistic post: 'Gratitude is powerful'

Ahead of the Chehre's release, Rhea Chakraborty, who will be sharing screen space with Amitabh Bachchan and Emraan Hashmi, took to her Instagram handle on Wednesday to share an inspiring note about gratitude.

Bollywood actress Rhea Chakraborty has had a tough time last year. At the peak of the COVID lockdown, she lost her boyfriend, actor Sushant Singh Rajput followed by multiple accusations and legal troubles. She was under the scanner of multiple investigating agencies and had to spend a month behind the bars in Mumbai's Byculla jail last September. While the actress requested some peace and privacy post her arrest, she is back in the limelight with her upcoming release, Chehre.

Ahead of the film's release, Rhea, who will be sharing screen space with Amitabh Bachchan and Emraan Hashmi, took to her Instagram handle on Wednesday to share an inspiring note about gratitude. "Take a minute and say 'Thank you. Thank You'. Gratitude is powerful," Rhea wrote on her Instagram stories. 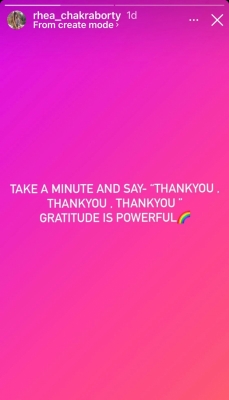 Details about Rhea's role in the film have not been discussed much. The actress has been missing from the posters and teaser of the forthcoming film. However, she made an appearance in the trailer. At the time of the trailer launch, film producer Anand Pandit in a statement said Rhea was always part of the film. "There was never any question of not having Rhea in the film. She was, is and will always be an integral part of Chehre. I don't believe in getting swayed so easily," he said.

This will be Rhea's first release after her boyfriend Sushant Singh Rajput's death. Rhea was accused by the family of abetting his suicide and she even spent a few weeks in custody after being charged with possession and supplying of drugs.

Talking about Chehre, the movie will portray Big B and Emraan Hashmi pitted against each other in a game of justice and punishment.

"Chehre" has been directed by Rumy Jafry and also features Annu Kapoor, Raghubir Yadav, Krystle D'Souza and Siddhanth Kapoor. It will be released on Friday in theatres.