In the 3D action drama Adipurush, actor Prabhas is set to play the role of Lord Ram while Saif Ali Khan will be seen as Ravan. Actress Kriti Sanon will be seen as Sita. The film will hit the screens on 11th August 2022.

The makers of the upcoming 3D action-drama Adipurush on Thursday finally announced the leading lady of the film. Actress Kriti Sanon will be seen romancing South superstar Prabhas in the role of Sita. While there were rumours that actresses like Anushka Sharma, Anushka Shetty, Keerthy Suresh, Kiara Advani and others are being considered for the role, Kriti Sanon 's name had topped the list. Sharing the same on social media, Prabhas wrote, "Welcoming @kritisanon and @mesunnysingh to the #Adipurush family." Along with Kriti, Pyaar Ka Punchnama fame Sunny Singh has also joined the star cast.

Last month, actor Sunny Singh had taken to Instagram to reveal that he had got a warm welcome from the director of Adipurush, Om Raut. Sunny shared a glimpse of a bouquet and a letter sent to him by the filmmaker. The note which the actor received read, "Dear Sunny, Thank you again to be there...First day of our new journey together. God willing many more such. Luv, Om." 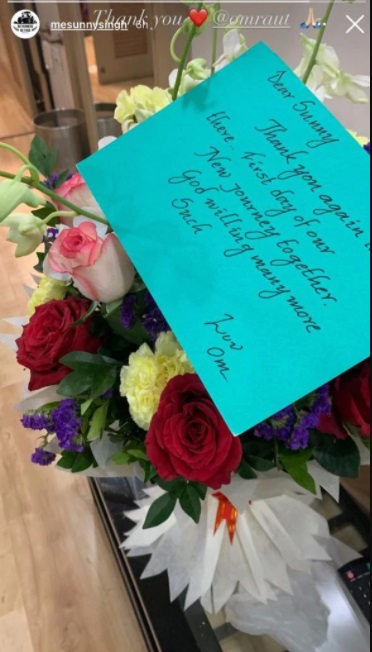 Adipurush has gone on floors in January this year but the shoot stopped after a massive fire broke on the sets. A report added, "It will mostly be shot in the studio against a chroma screen. Om and Bhushan have been talking to VFX technicians of international repute, who have worked on films like Avatar and Star Wars, to make the shooting process smooth and mount the film on a certain scale."

In the 3D action drama Adipurush, Prabhas is set to play the role of Lord Ram while Saif will be seen as Ravan. It is a period drama set 7,000 years ago and will be directed by Tanhaji fame Om Raut. Saif will be reuniting with Tseries Bhushan Kumar and director Om Raut for the second time with the film. Talking about the film, Saif Ali Khan said, "I’m thrilled to be working with Omi dada again. He has a grand vision and the technical knowledge to pull it off. I’m thrilled to be a part of this project. I look forward to clashing swords with the mighty Prabhas and to play a role that is electrifying and demonic."