Former External Affairs Minister Sushma Swaraj has left us at the age of 67 after a cardiac arrest on Tuesday night. The minister was undoubtedly one of the most loved politicians in India for her zeal to fulfil her duties as a human first and then as a minister. Swaraj always maintained that she is there for the citizens of her country whenever they need her, no matter on land they are. Through tweets or messages, Swaraj always welcomed the problems of her citizens with open arms and tried to rescue them each time. Not just the citizens, Sushma Swaraj came to the rescue for many celebrities as well when they were stuck on foreign land and needed help. Sushma Swaraj extended help to TV star Karanvir Bohra, Bollywood diva Mallika Sherawat and Sridevi and many others. Here are 4 times when the External Affairs Minister extended help to the celebrities and won hearts-

After the sudden demise of legendary Bollywood actress Sridevi in February last year, Sushma Swaraj extended her help to the Kapoor family in bringing back the mortal remains of the actress. Sridevi attended her nephew Mohit Mawra’s wedding in Dubai last year after which she was found dead in her room’s bathtub. While the family was in shock and were not able to understand anything, Sushma Swaraj helped to get the procedures done quickly and bring the actress back to Mumbai. 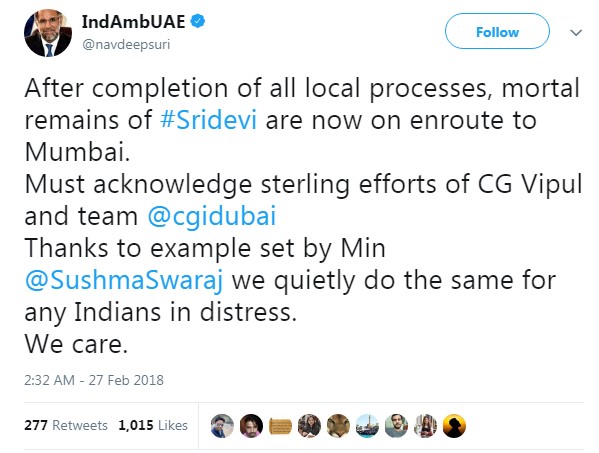 TV actor Karanvir Bohra had flown away to Moscow to attend an event when he got stuck at the airport there because of damaged passport. The actor was detained and was refused entry in Moscow. However, when the actor revealed about the same on Twitter, Sushma Swaraj jumped in to help the actor an disused him a temporary passport so that he could complete his work commitment. The actor thanked the former external affairs minister with a tweet afterwards.

so bummed... waiting at #moscowairport coz my passport is a little damaged.
They contemplating to deport me back to India. @IndEmbMoscowRus @IndEmbMoscow i wished you would have told me that prior to issuing me the visa.
feeling bad for @IndianFilmsRus

I have no words to thank the @IndEmbMoscow 4 helping me get a brand new temporary passport and a visa.celebrity or no celebrity, i know one thing for sure, we Indians are in very safe hands when we travel abroad... thanks to @SushmaSwaraj and the #IndianEmbassy for their help

Popular YouTube Lilly Singh was struggling with getting a visa for India in 2017 as she had to visit the country to promote her book. The popular diva then took to her twitter to slam the ‘consulate of india in Toronto’. Soon after Sushma Swaraj read the tweet, she offered to help and made it easy for the YouTuber to visit the country.

Love india but gotta say that the consulate of india in Toronto is literally the worst place on earth. Such a disappointment.

For travel to India, the consulate makes acquiring a visa the most difficult task. I hope one day @narendramodi can remedy this. It's sad.

.@SushmaSwaraj just a kind note to make you aware that the Consulate of India in Toronto is extremely difficult and unprofessional. 🙏🏽

When Adnan Sami landed in Kuwait with his staff, the singer was mistreated by the Immigraion department. He took to his twitter and wrote, “@indembkwt We came 2 ur city wt luv & our Indian brethren embraced us with it. U gave no support. Kuwaiti airport immigration mistreated my staff 4 no reason & called thm ‘Indian Dogs’! Wn u wr contacted u did nothing!! How dare d Kuwaitis behave like this with arrogance?!” Learning about the incident, Sushma Swaraj offered her help and rescued them from Kuwait.