As soon as the actor deleted all his Instagram posts, Sushant Singh Rajput fans were left rather disappointed and puzzled.

Bollywood actor Sushant Singh Rajput, who was recently seen in Sonchiriya opposite Bhumi Pednekar, has been trending on the internet for a peculiar and rather confusing reason. The actor, who enjoys a fan following of 7.8 million, deleted all of his photos on Instagram and left his fans intrigued with his actions. Furthermore, the actor has written 'NOT HERE RIGHT NOW' as his Instagram bio.

Instagram is one place where the likes and followings always seem to boost one's presence and going down to zero posts is indeed a big decision after all. 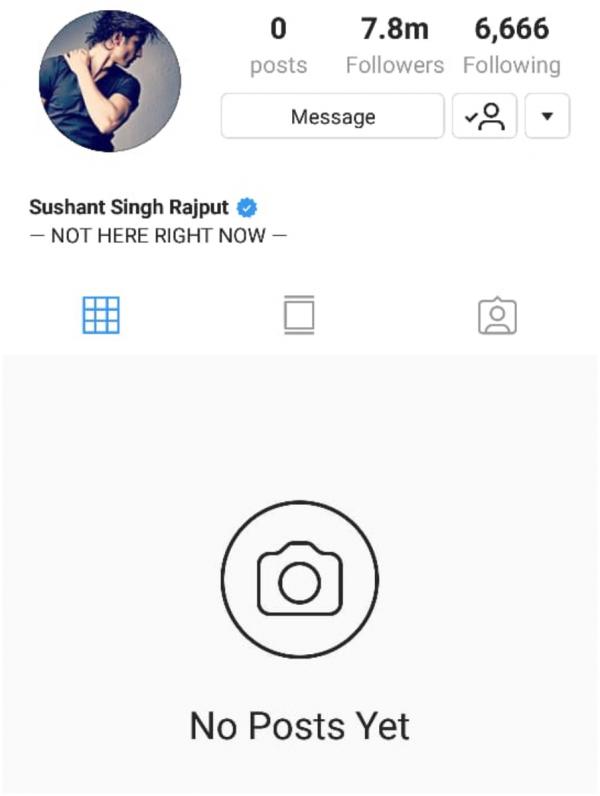 As soon as the actor deleted all his Instagram posts, Sushant Singh Rajput fans were left rather disappointed and puzzled.

Sushant Singh Rajput has always been noticed for his social media posts, especially his tweets that were even philosophical at times. Once when asked about this in an interview with Bombay Times, he had replied, “It’s not philosophy. I was always a science student and was never into anything that had nothing to do with certainty. Science is all about certainty, about laws and it doesn’t deal with a subjective point of view. I was wired like that. Once I started reading different kinds of books, which were also to do with science, it changed the way I thought. There’s this forum The Edge, where John Brockmon calls the best guys from different disciplines — Astrophysics, Quantum Physics, Behavioural Economics, Cognitive Science — and they discuss their experiences. If you read the books on that, then you realise that scientists are now saying that everything is just approximations, not certainties. So, whatever I write is not philosophy, it’s science because science tells you that there is nothing right, nothing wrong. It’s just your opinion, my opinion. Or it’s your way of looking at things or my way of looking at things.”

Meanwhile, after rounding up Sonchiriya, Sushant Singh Rajput has started working on his next project Chhichhore with Shraddha Kapoor.

Also, Sushant Singh Rajput will start working on Mukesh Chhabra directorial Dil Bechara with Sanjana Sanghi. The film will mark the debut of popular model Sanjana Sanghi in Bollywood. It is an official Hindi remake of The Fault In Our Stars which had Shailene Woodley and Ansel Elgort.