Sonam Kapoor and Anand Ahuja spend most of the time away from each other due to their work commitments. While Anand manages his own brand and business in New Delhi, Sonam is most of the time in Mumbai due to her Bollywood projects. Whenever they find the time, they travel and party together. After sparing herself some time, Sonam Kapoor jetted off to New Delhi to be with her husband Anand Ahuja. The couple went to the party capital of the city, Hauz Khas and spent the night at a plush and popular lounge. They shared pictures and videos from their night well spent.

Sonam Kapoor and Anand Ahuja were joined by the latter's brother Anant Ahuja and the renowned designer Nimish Shah of label Shift.

On Monday, Sonam Kapoor shared a throwback picture from her and Anand Ahuja's LA tour. The picture was clicked at LA County Museum of Arts. In the picture, the lovebirds are gazing at each other in love.

Art days at @LACMA with my favorite travel companion 🥰💯 Tap link in bio to see everything we did in @discoverLA. #discoverLA #LACMA #LosAngeles #California

Coming to throwback, Anand Ahuja posted an old picture with wife Sonam Kapoor on her Instagram in which both of them are sitting on the floors at the airport. The picture went viral on the internet with fans praising their down-to-earth nature. 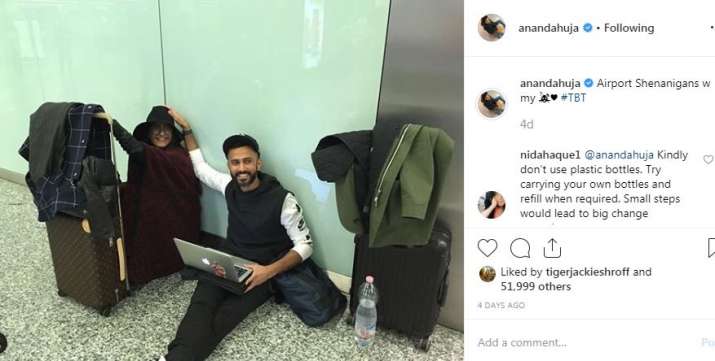 On the work front, Sonam Kapoor is working with Dulquer Salmaan in The Zoya Factor. She is playing the role of a physiotherapist in the film. The film is slated to release in June this year.