Sonam Kapoor has a knack for clicking Anand Ahuja's perfect pictures. Yet again, she clicked a bare body picture of him from their bedroom in which he can be seen sleeping.

Bollywood actress Sonam Kapoor and husband Anand Ahuja tied the knot last year at her aunt’s mansion in Mumbai. The duo is so much in love with each other and keeps on sharing pictures from their vacations and other occasions. Yet again the Veere Di Wedding actress took to her social media account to give a sneak peek of her bedroom. Not only this, she even shared a picture of her husband’s tattooed bare body.

The actress has a knack for sharing her husband’s perfect picture and yet again she praised him in the latest picture which she posted on her Instagram story. Her story showed Anand sleeping peacefully on the bed having illustrious tattoos on his back. It seems as if she’s in aww of her husband as she wrote alongside, “He’s so cute.” 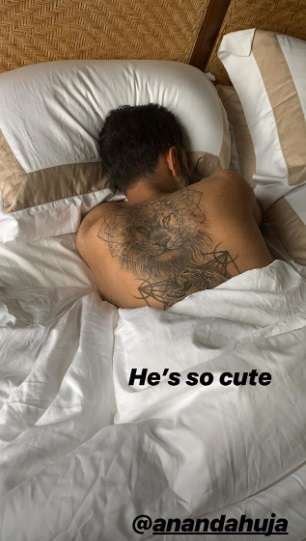 Sonam, previously in an interview opened up how she fell in love with him and said, "Recalling my first date "I was apparently wearing the worst sneakers he had ever seen. I keep telling him that he fell in love with me despite my bad sneaker game... That day, walking and talking in London, I knew he was the love of my life."

ALSO READ: Ram Kapoor's wife Gautami Kapoor has THIS to say about his drastic transformation

Meanwhile, have a look at the couple’s some other pictures here:

Talking about work front, she was last seen in the film Ek Ladki Ko Dekha Toh Aisa Laga and will next be seen in The Zoya Factor, which stars Dulquer Salmaan. The movie is based on a novel and is directed by Abhishek Sharma. It is slated to hit the screens on September 20.