If Priya Prakash Varrier has such a huge fan following now, we wonder what will happen once the film releases.

Internet has discovered its new crush in Priya Prakash Varrier and it just can't stop swooning over her. Since last couple of days, our social media news feeds have been captured by flirtatious expressions of Priya. For unversed, let us tell you that just before Valentine's Day, a music clip featuring Priya sent internet into meltdown.

The music video is from movie Oru Adaar Love and the song is Manikya Malaraya Poovi. The clip which has two students flirting with each other in a packed auditorium is being loved by netizen. And one thing that is making people watch it over and over again is Priya's cute wink.

After the video went viral, Priya shot to fame overnight and garnered more than 606 K Instagram followers in a day. Her video is being reshared and she has become part of various memes. But, if you think that you are the only one that can't get over her cute expressions, then you are probably wrong. Even Bollywood actors Arjun Kapoor and Vicky Kaushal have liked the video. Don't believe us, check the screengrab below. 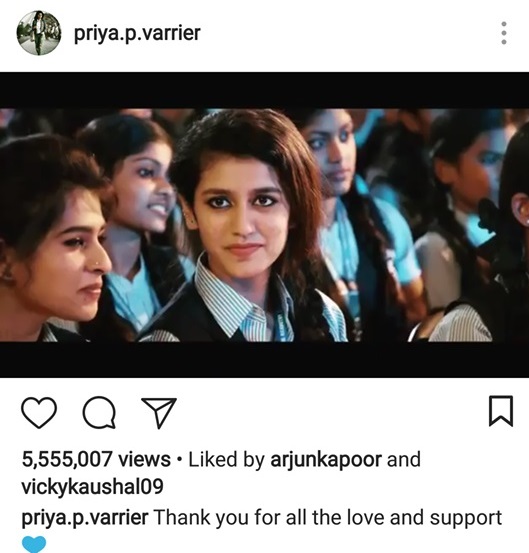 That's called the real charm. Isn't it? Newbie Priya is making her debut with Oru Adaar Love and if she has such a huge fan following now, we wonder what will happen once the film releases.

In a recent interview with Hindustan Times, Priya said that her mailbox is full of messages from men asking her out on a date on Valentine’s Day. We knew it.

Check out the video below