Ranbir Kapoor and Amitabh Bachchan were out and about on the streets of New York and all they did was walk around and click selfies.

The star cast of Brahmastra definitely knows how to add jazz to their work by involving in different fun-filled things. The cast was in Bulgaria where the terrific trio of Amitabh Bachchan, Ranbir Kapoor, and Alia Bhatt was shooting. After pouting enough with father Rishi Kapoor while promoting 102 Not Out, it was son Ranbir Kapoor’s turn to take selfies with Big B.

Ranbir Kapoor and Amitabh Bachchan were out and about on the streets of New York and all they did was walk around and click selfies. Amitabh took to his Twitter to share the pictures and wrote, “T 2874 - Out on a walk on the streets of NYC with THE Ranbir Kapoor .. selfies and all ..” While the men are here having fun, we wonder what Alia Bhatt was doing.

Amitabh has been sharing many things from his Brahmastra shoot through his social media account. Just a day before, Big B shared a picture of himself sitting in the sun in Bulgaria and wrote, “T 2873 - Out in the sun after decades! Does not happen in the sunniest of places .. but happens here ..Bulgaria.”

He also wrote a blog post in which he said, “Filmmaking from my times has undergone substantial change. Hundreds of unit and crew work assiduously on projects these days, every little detail of the making and production is looked at with such a degree of importance and a liberty it astonishes me. I feel guilty at times at what is on offer from the unit at times.”

Even Alia Bhatt shared pictures with her girl gang and Ranbir while they were out exploring the beautiful city of Bulgaria. 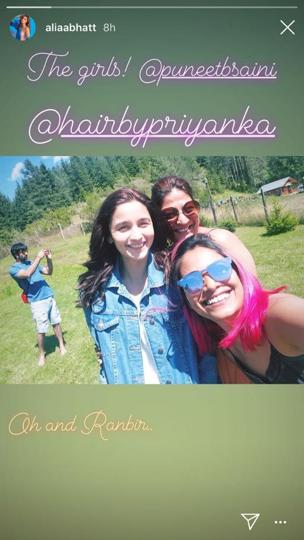 take you wonder by wonder 🧚‍♂️