Neha Kakkar and Himansh Kohli’s whirlwind romance made a lot of headlines last year when their single O Humsafar was released. However, their relationship didn’t survive for long. They called it quits after months of dating each other. Soon after their break up, reports started doing rounds on the internet that Himansh Kohli had cheated on his now ex-girlfriend Neha Kakkar, which led to their fallout. Stumbling open a fake news article suggesting that Himansh Kohli has cheated on her, Neha Kakkar posted an Instagram story, rubbishing the reports.

She wrote, “I read some article online which was Fake & Disturbing. Yes, I said I’m hurt but I NEVER said I got betrayed. When it comes to being Loyal, He’s TheBest! So plz Stop blaming him & putting Wrong Allegations. We just can’t spoil anybody’s reputation without even knowing the facts!” 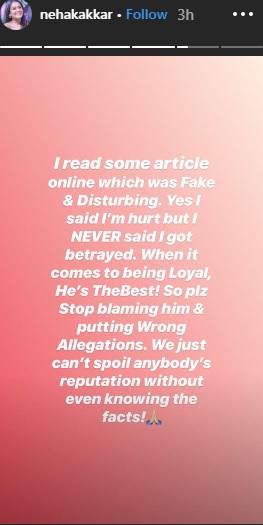 Earlier, Neha Kakkar opened up about her depression battle on the social media. She even blamed the trolls for her mental condition. The actress was trolled by social media users for having dumped her ex-boyfriend Himansh Kohli. On late, Neha Kakkar broke down on the sets of Super Dancer 2 when a contestant performed to her song.