Mom-to-be Mira Rajput’s cutesy DIY creation for her baby will tug at your heartstrings. See picture

Mira Rajput shared a picture on her Instagram story which depicted a cute craft which she made for her baby.

Other than being a doting mother to daughter Misha and a loving wife to Bollywood actor Shahid Kapoor, Mira Rajput Kapoor definitely has a strong personality of herself. There is no denying that she is actually just like what her bio on Instagram reads ‘Girl from another world’. After celebrating her little muchkin Misha’s birthday, Mira Rajput occupied herself with some DIY work early in the morning for her baby.

Earlier in the day, the soon to be second-time mother Mira Rajput shared a picture on her Instagram story which depicted a cute craft which she made for her baby. This is no news that Mira Rajput and Shahid Kapoor are preparing to welcome their second child and this colourful creation, made by Mira herself, just adds to the happiness they are feeling. Watch her Instagram story here- 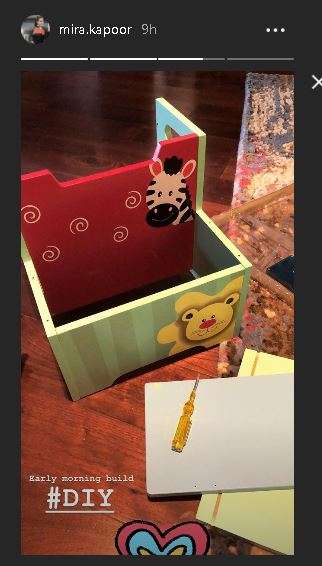 The picture definitely shows that Mira is not just a dedicated mother but is very creative as well. Even husband Shahid Kapoor is all praises for wife Mira when it comes to keeping him grounded and face to face with the real world.

In a recent interview with Hindustan Times, the actor talked about how he is feeling about becoming a father for the second time. He said, “Having a child is the most amazing feeling. And we are fortunate that we are having a second one so soon, so [I am] feel happy and blessed about that. Family is always a big reason to work even harder. When you come back home to your family [after work], it’s a great feeling.”